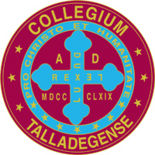 Talladega College is a private, historically-black liberal arts college in Talladega. The college has an enrollment of about 650 and offers majors in social sciences, education, business administration, and in the humanities and fine arts, natural sciences and mathematics. The college's president is Billy C. Hawkins, who succeeded Oscar Prater in 2007.

The college started as a one-room school for African Americans founded in 1865 by freed slaves William Savery and Thomas Tarrant with help from the Freedmen's Bureau and Alabama's military governor Wager Swayne. In 1867 the school moved into the former Baptist Academy building nearby. Because of Swayne's help in securing the purchase, it was named the Swayne School in his honor. In 1869 the school was chartered as Talladega College.

That original main building, Swayne Hall has been granted National Historic Landmark status and has been stabilized and restored using funds from the Historic Black Colleges and Universities Program administered by the National Park Service. The 1939 Savery Library replaced a Carnegie-built library from 1907. Its Hale Woodruff murals of the Amistad revolt are treasured works of art. Interior renovations to Swayne Hall, the Savery Library, Silsby Science Hall and DeForest Chapel were underway as of July 2007.

The school was listed as one of the "Best Colleges in the Southeast" in the 2005 edition of the Princeton Review's "Best 357 Colleges."

From late 2004 to 2006 Talladega College was given probationary status by the Southern Association of Colleges and Schools due to weak finances. In 2009 the association gave the college a full 10-year accreditation without penalty or sanction.