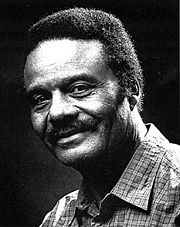 Rhoden was raised in Birmingham and graduated from Parker High School where his artistic skills were recognized. He had the opportunity to visit William Grant and Lamar Dodd, both of whom encouraged him to develop his talents.

He earned a scholarship to attend Talladega College and stayed two years before traveling to New York where he was taught by Richmond Barthé. During his Army service, Rhoden was commissioned to create several portrait busts of U. S. Generals.

After his tour, Rhoden enrolled in the School of Painting and Sculpture at Columbia University. While there he studied under Oronzio Maldarelli, Hugo Robus and William Zorach. He was awarded the Rosenwald Fellowship to continue his studies in 1947. In 1947, 1948 and 1950 he was given the first prize for sculpture at Columbia. In 1950 he added a scholarship from the Skowhegan School of Painting and Sculpture and a Tiffany Award. Followed by a Fulbright fellowship in 1951 and the prestigious Prix de Rome in 1952, renewed twice, which allowed him to study at the American Academy in Rome, Italy through 1954.

From 1955 to 1959 Rhoden was one of a small group of artists selected by the United States Department of State to tour around the world. He visited Iceland, Ireland, Finland, Norway, Italy, Germany, Turkey, Egypt, Kenya, Rhodesia, Uganda, Tanganyika, Zanzibar, the USSR, Poland, Yugoslavia, India, Cambodia, Thailand, Indonesia, Vietnam, Korea, Japan and the Phillipines.

In 1961 Rhoden was given an honorarium by Howard University, a Guggenheim fellowship and a Rockefeller grant. The latter grant allowed him to work in Indonesia. Most of his work during the 1960s and 70s drew explicitly from his exposure to the world's native cultures during his travels. He was further inspired by the Cherokee and Minominee Indian heritage of his wife, Richanda.

He went on to receive commissions for the Harlem Hospital, Belleview Hospital and the Metropolitan Hospital in New York City, for Clifton High School in Baltimore, Maryland, and for the Sheraton Hotel and the Afro-American Museum in Philadelphia, Pennsylvania. His work has been exhibited at the Art Institute of Chicago, the Boston Museum of Fine Arts, the Pennsylvania Academy of Fine Arts, and the Whitney Museum of American Art among several others.

From January 20 to March 17, 1984 the Birmingham Museum of Art exhibited a retrospective of Rhoden's sculpture. In 1992 he was appointed head of the Art Commission of the City of New York. He and Richanda operated a gallery in Brooklyn Heights.