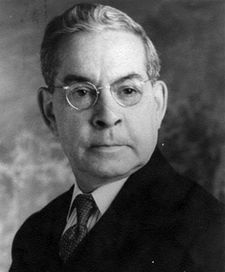 Arthur Harold Parker (born May 7, 1870 in Springfield, Ohio; died August 17, 1939 in Birmingham) was the long-time principal of Industrial High School in Birmingham, which now bears his name.

Parker's father was the son of a white man and a Chickasaw woman who was born in Decatur (Morgan County). He had taken the name "Parker" from his master, when he escaped to Canada at the age of 12. After the Civil War he returned to Springfield, Ohio where he became a barber and shopkeeper. Parker's mother was born a slave in Virginia, given money for school by her former master when she was emancipated. She attended Oberlin College in Ohio and married Parker in 1867. Arthur was the second of their five children.

While Parker was in high school, his mother fell ill during childbirth. He started working at his father's barber shop as well as doing his share of the housekeeping. He also studied law for two summers under one of his barbering clients, Judge Joe Miller, and was honored as a graduation speaker for his integrated high school.

Due to an injury to his father, Parker was unable to enter Oberlin College as he had planned. Instead he packed up his barber tools and went "prospecting" in the south.

He was headed initially to Decatur, but after stops in Nashville and Atlanta, he decided to come, on August 17, 1887, to Birmingham, where he learned two of his uncles were living. These were Arthur Sensabaugh, a Methodist pastor, and James Clayton, a school-teacher.

It was Clayton who encouraged Parker to take the teacher's examination that September. Superintendent J. H. Phillips hired him as the 13th African American teacher in the system and assigned him to the second graders of the new Slater School which opened in January 1888 and absorbed students from the former Fifteenth Street School.

Parker advanced to the third and fourth graders the next fall. In 1889 he joined the Alabama State Teachers Association. That summer he and Clayton travelled to Ohio to visit Parker's family. Parker toured county fairs with his father, cutting hair and trading horses. Before he returned he engaged and married his high school girlfriend, Mary Anderson, at the insistence of his mother.

Back in Birmingham, the new couple found a house on 14th Street North, near the Slater School. The school had recently purchased an organ, so Parker spent his spare time there learning to play. He became proficient enough to play for school programs as well as to take side jobs and teach music classes. He also began working as private secretary for William Pettiford, pastor of the 16th Street Baptist Church.

In 1890, Parker sent his wife to Ohio to tend to his mother, who died that November. Mary herself took ill from the strain and she passed away in July 1891, just hours after Parker was baptized by Pettiford at his church, which was next door to the Parker's second home. In the wake of that loss, Parker determined to become a school principal and successfully completed the principal's examination. His first post, in September 1892, was at the Cameron School, succeeding C. V. Auguste who had transferred to the Slater School.

After a while Parker became fond of Dr Pettiford's cousin Bessie, who was employed at Tuskegee Institute. They married on June 5, 1895 at the Institute's chapel and moved into a new house across the street from the Cameron School. In addition to heading that growing school, Parker was superintendent of the Sunday school at 16th Street Baptist. On December 22, 1896, Bessie died in childbirth. Despondent, he considered leaving the city. He stopped teaching after the 1897 school year and took a position with the Internal Revenue Service. He did not enjoy the work, but did meet a new woman, Anna B. Gilbert, whom he married on December 21, 1898. She encouraged him to return to teaching, and he was re-hired as a 7th grade instructor at the Lane School in the fall of 1899. 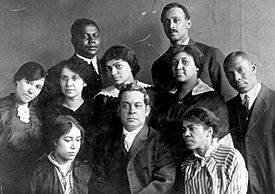 During that year the Birmingham Board of Education agreed to create a high school for black students. Phillips selected Parker to become the sole teacher for the Industrial High School when it opened, on the second floor of the Cameron School, in September 1900. The next year he rose with his students and J. R. Coffey took charge of the entering frehsmen and Parker's role as principal was secured. He emphasized practical instruction in woodworking and sewing as the focus of instruction, supplemented by Grammar, Literature and Mathematics. He presided over the school's first graduation ceremony, held June 3, 1904 at 16th Street Baptist.

In 1905 Parker was elected president of the Alabama State Teacher's Association. He delivered an address to the assembled body at their next annual meeting in Mobile in April 1906. That same year he and his friend E. A. Brown began buying vacant lots at Mortimer Street and 7th Avenue North. Parker completed a new house there in December 1907. To help cover the cost, he worked as head of bookkeeping for the Alabama Penny Savings Bank, leaving the company as auditor in 1912. 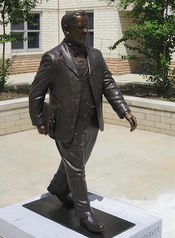 Statue of A. H. Parker

In September 1910 Industrial High moved to the Lane's Auditorium building at 11th Street and 8th Avenue North. New specialized instructors were added to the faculty to teach cooking, sewing, and manual training. The next year a night school for adults was started, and then a summer school for teachers. Parker also participated in the first of a series of state-wide summer institutes for teachers in each county. In 1914 the school building was condemned by the city and a deal was struck to purchase the former United Presbyterian School at 8th Avenue and 9th Street North. Soon later a cluster of 14 cottages on an adjacent lot was purchased and converted for classroom use.

In 1915 Parker started teaching summer classes at Tuskegee Institute. In the fall of 1918, Industrial High School was temporarily closed to serve as an infirmary during an influenza epidemic. Beginning with the purchase of property in 1920 and culminating with the completion of the present A. H. Parker High School in 1924, the construction of a modern, well-equipped school for African Americans set Birmingham apart as a progressive city. Parker was awarded the Negro Citizens' Loving Cup for "that citizen that had done the most for his race in 1924".

Parker retired as principal of Industrial High School in 1939 and died later that year. Funeral services were held in the school's auditorium, with burial at Oak Hill Cemetery. The school was later renamed A. H. Parker High School in his honor. A statue of Parker, created by sculptor Brian Owens, was located on the lawn in front of the school on August 18, 2013.