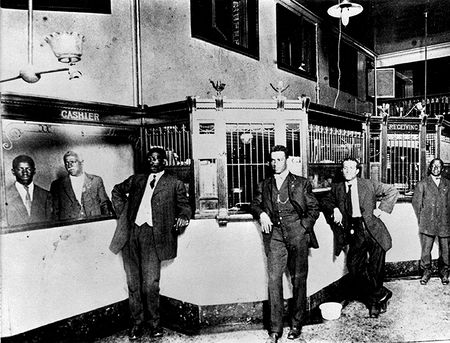 The Alabama Penny Savings Bank, founded October 15, 1890, was the first African-American owned and operated financial institution in Birmingham, and one of the first three in the United States. One of the organizers of the Penny Savings Bank was 16th Street Baptist Church pastor William Pettiford, who provided the initial $2,000 in capital. Other officers included physician Ulysses Mason, Indianola banker W. W. Cox, and an unnamed saloonkeeper. In its early years the bank's officers did not take salaries, helping the bank survive the 1893 panic which spelled failure for other institutions.

Educator Booker T. Washington said this about the institution in an address given in Birmingham on January 1, 1900:

I wish to congratulate you among other things upon the excellent and far reaching work that has been done in Birmingham and vicinity through the wide and helpful influence of the Alabama Penny Savings Bank. Few organizations of any description in this country among our people have helped us more, not only in cultivating the habit of saving, but in bringing to us the confidence and respect of the white race. [...] The people who save money, who make themselves intelligent, and live moral lives, are the ones who are going to control the destinies of the country.

The bank's first building, a three story stone and brick structure, was located at 217 18th Street North. In 1913 the bank constructed a new six-story building one block north, now known as the Pythian Temple. It was built by the black-owned Windham Construction and some have identified its style with the work of African American architect Wallace Rayfield, who kept an office in the building for a time. The bank did provide financing for many of the homes that Rayfield designed for Birmingham's black professionals.

In April 1914 J. O. Diffay took over from Pettiford as acting president, and succeeded him as president after his death that September.

In 1915 both black-owned banks operating in the city, the Alabama Penny Savings Bank and the Prudential Savings Bank, founded by Ulysses Mason in 1910, were faced with bankruptcies. Washington helped to coordinate assistance in the form of secured loans and a last-minute effort to effect a merger. which operated briefly under the name of the Alabama Penny-Prudential Savings Bank. Later that year the Penny Savings Bank closed. The building was purchased by the Grand Lodge of the Knights of Pythias, and, since then, the building has been known as the Pythian Temple.