18th Street North is one of the primary north-south streets in downtown Birmingham's business district.

18th Street begins at the northern end of 18th Street South, at the 18th Street underpass underneath the railroad tracks of the Railroad Reservation. From there it first crosses Morris Avenue and continues north until ending for Oak Hill Cemetery at 11th Avenue North. Between 1st Avenue North and the cemetery, the downtown section of 18th Street is one-way for north-bound vehicular traffic.

Electric lights were installed 18th Street North from Morris Avenue to 6th Avenue North in 1945 under the city's contract with the Birmingham Electric Company.

One block of 18th Street, between 1st Avenue and 2nd Avenue was converted from one-way to two-way traffic on December 5, 2016, allowing for better access to the Pizitz parking deck as the reopening of the Pizitz Building neared.

For an alphabetical list of locations, see the 18th Street North category. 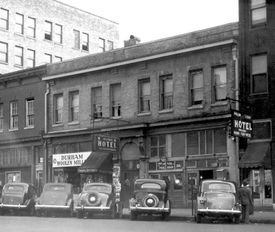