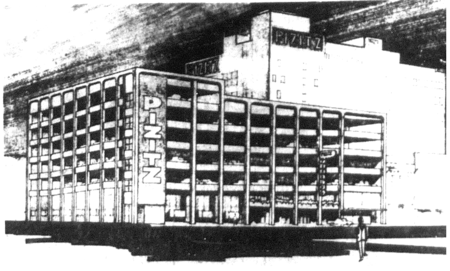 Rendering of the Pizitz parking deck

The Pizitz parking deck is a six-level parking deck located on the northeast corner of 18th Street and 1st Avenue North. It was built in 1965 on the site of the Shoppers' Park Lot for the convenience of customers of the adjoining Pizitz department store.

The 161,130 square-foot deck was designed by Richard C. Rich & Associates and Enco Engineering. It featured 380 spaces with 365 square feet of space for each car and no interior columns to navigate. Two entrances included automatic ticket dispensers and the two exits each had payment kiosks. An "electric eye computer" counted the number of cars entering and exiting the deck to warn visitors in case it would be full before they entered. Two self-service elevators conducted visitors to the ground floor or to a raised skywalk for access to the department store near the bakery section.

Pizitz president Isadore Pizitz said that the $1 million dollar project should "show our confidence in Birmingham's progress and its great future." Shortly before it opened in the fall, the Birmingham News noted that the new deck "has been hailed as an example of what must be done to solve Birmingham's downtown parking pains."

After the downtown department store closed in 1998, the parking deck remained vacant until Bayer Properties restored it as part of their The Pizitz apartment and retail development, which opened in early 2017.