This article is about the Birmingham theater. For the Bessemer theater, see Frolic Theatre (Bessemer). 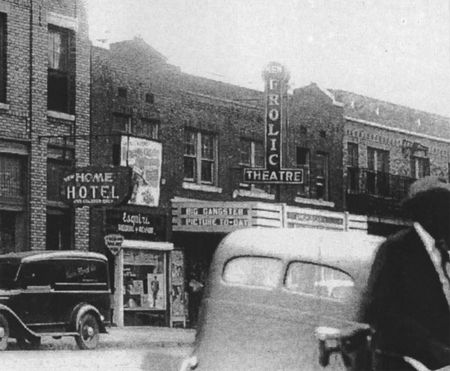 The Frolic Theater was an 850-seat Vaudeville house and cinema, billed as "Birmingham's only colored Vaudeville house" when it was a stop of the Theater Owners Booking Association (T.O.B.A.) circuit in the 1920s. Henry Hury and Paul Engler's Hury Theatre Company managed the Frolic for Gay Theater Properties.

In 1921 the theater was located alongside the Champion Theater at 312-314 18th Street North. A year later, both houses were managed by Engler and shared an address at 1720-1722 4th Avenue North, across the street from the Famous Theater. By then it was said to be the finest of the city's black theaters, with its own five-piece orchestra led by Henry Callin with Walter Young, Shead Harris, Fred Moore and John Ovelton. The Frolic and Champion were operated together by Willie Swansey, Wallace Simms and H. Adams, with cashiers Martha Smith, Rachel Jones, and Julia Scott.

The venue was known for booking major blues acts. The Frolic enjoyed a packed house when it hosted Bessie Smith in 1923 and again on December 27, 1926. Ma Rainey performed several nights at the Frolic in August-September 1925 (with Bessie Smith in attendance). Other blues performers included Cleo Gibson, Ruby Smith and Lillie Mae Glover.

On December 19, 1924 the theater opened its doors to a white audience for a special "Midnight Review" with a bill topped by Ida Cox. A follow-up two weeks later was headlined by blackface singers "Butterbeans & Susie". The promotion proved popular, with audiences packing the auditorium despite poor weather, and demanding "encore after encore". Hury planned to continue on a bi-weekly basis, however Mayor David McLendon objected that that shows (which he had not witnessed), were, "objectionable from the standpoint of health, morals, and the intermingling of the races." He asked city attorney W. J. Wynn to draft an ordinance to order theaters to close at a more reasonable hour. Hury and his attorney, White Gibson met in McLendon's office on Saturday morning, January 10, 1925. Hury, not wishing, "to do anything to antagonize city officials or the public," agreed not to hold such events in the future and McLendon agreed to drop the proposed ordinance.

In addition, the Frolic hosted Seals & Mitchell's Melody Lane Girls in 1927, tapdancer Jack Wiggins, cornet player Lee Collins, comedy duo Butterbeans & Susie (with Jo Jones on drums). A March 3, 1923 performance by the Washington "Buttermilk" Goodner Trio was cut short due to "smutty" jokes. The act regrouped as a team and rehearsed a cleaner version of the show for manager Henry Hury and stage manager R. B. "Happy" Brown, but Goodner left during rehearsals and failed to finish out the week-long booking. Hury and Brown remained there through at least 1928. Engler continued to manage the business, then called the New Frolic Theatre, through the 1930s

The Frolic closed in the mid-1950s and was demolished. The site is presently occupied by a parking lot for the Hugo L. Black Federal Courthouse.