This article is about the Baptist minister and entrepreneur. For the creator of the American Village, see Thomas G. Walker. 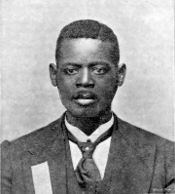 Walker was born to Emanuel and Charlotte Harris, then slaves owned by Benjamin Harris. In 1860 he and his family were sold at auction. After emancipation and the death of Emanuel, Charlotte moved the family to Wetumpka, where Thomas worked and became active in the church. In 1870 Walker moved to Montgomery County and joined Elam Baptist Church where he rose to become superintendent of the Sunday School. He moved to Birmingham in 1881 and joined the First Colored Baptist Church where he became a minister, helping found the Second Colored Baptist Church in Hillman's Quarters where he was first licensed to minister by Silas Jones. He was ordained in 1884 by William Pettiford and soon accepted the pulpit of 6th Avenue Baptist on Southside. In 1890 he led efforts there to rebuild after a fire. His folksy and emotional preaching style, drawing from the sermons he heard from his father, a slave preacher, and at Elam Baptist, divided the congregation at 6th Avenue. He left to take the pulpit of First Baptist Church of Brighton later in 1890, then returned to Birmingham a year later to found Shiloh Baptist Church. By 1895 his new church boasted a membershop of over 2,000. The congregation erected a new building seating 3,000 worshippers in 1901.

Like Pettiford, Walker's sermons often addressed the practicalities of economic independence and racial solidarity in improving the welfare of the race. He stressed education, thrift and temperate behavior to his congregation, and, like Pettiford, he helped organized several businesses to serve the African American community. He opened a shoe store, a livery stable, the Woodlawn Cemetery, the Great Colored Drygoods Store, the Union Drug Company, a newspaper, a funeral home, a brickworks, the Birmingham Grate Coal Mining Company and the Afro-American Benevolent Association, a mutual aid society that grew into the Union Central Relief Association, the first black-owned insurance company chartered in Alabama (1901). In 1909 he organized the Afro-American Land, Improvement and Investment Company with plans to develop new homes.

From 1890 to 1896 Walker moderated the Mount Pilgrim Baptist Association. He was one of the founders of the Birmingham Baptist College. He briefly served as moderator of the Jefferson County Association and the New Era Convention of Birmingham. He helped organize the 1902 National Baptist Convention whose largest meetings were held at Shiloh (including a closing speech by Booker T. Washington that drew such a crowd that confusion created a deadly stampede).

In 1906 an incident on a Birmingham Railway, Light and Power Company streetcar led Walker to protest the treatment given to black passengers. He was arrested and charged with non-payment of fare, disorderly conduct and resisting arrest, all of which he denied. Mayor George Ward acknowledged inadequate provision of streetcar service and called for additional cars. Part of the "solution" to the problems Walker and others pointed out was to institute separate car entrances for white and African American passengers.

Walker left Birmingham and moved to the North in 1919.