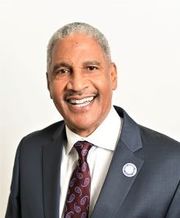 Michael O'Shea Lundy (born in Cincinnati, Ohio) was the president and CEO of the Housing Authority of the Birmingham District from January 2016 to March 2020.

Lundy, who spent part of his youth as a public housing resident, completed a bachelor of Arts in psychology at Knoxville College in Tennessee, and then earned a master's in public administration from Xavier University in Cincinnati. He began his career as a social worker for the Cincinnati Housing Authority. He has worked in Maryland and Pennsylvania, and served for 12 years as president and CEO of the Huntsville Housing Authority before coming to Birmingham.

Lundy was hired by a unanimous vote of the HABD board to succeed Naomi Truman as president and CEO. He took charge of a major campaign to redevelop large housing projects, often replacing units at smaller-scale apartment communities to avoid preserving large concentrations of public housing. He completed the redevelopment of Loveman Village in Titusville and got the long-awaited redevelopment of Southtown Court in Southside underway. He also commissioned a renovation of the Freedom Manor building on 4th Avenue North and proposed redeveloping the HABD Building as a 6-story mixed-use project.

Under pressure from the HABD board, Lundy eventually hired a director of public safety for the agency, and approved a proposal from the Birmingham Police Department Patrick Smith to introduce "High-Intensity Community Oriented Police Patrols" at public housing projects in September 2019. The high-profile death of a second young child at an HABD community that year undermined the small reductions in the overall crime rate.

Lundy, whose contract was to continue through 2023, was asked to step down in March 2020. He was succeeded by acting CEO Dontrelle Young-Foster.