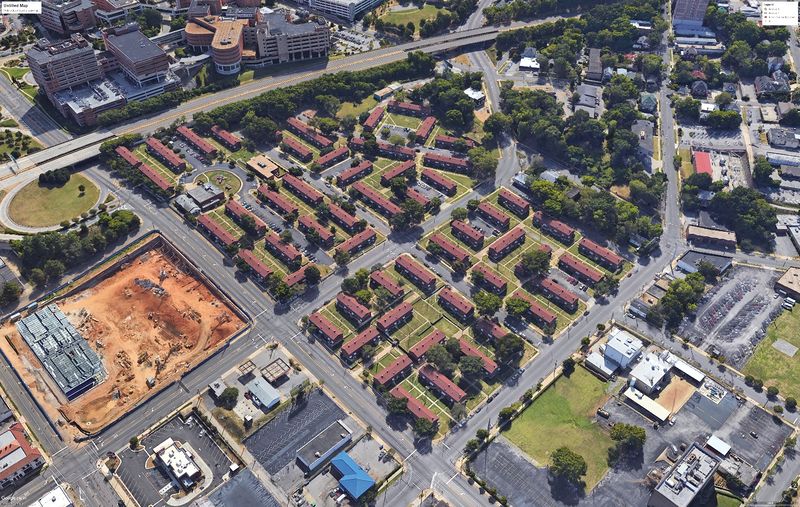 Aerial view of Southtown Court from the west

Southtown Court or the Southtown Housing Community is a 455-unit housing project owned and managed by the Housing Authority of the Birmingham District. It is located on a 25-acre site in the Southside neighborhood, bounded by 23rd Street South to the west, 10th Avenue South to the south, Red Mountain Expressway to the east and University Boulevard to the north.

The community, which originally had 480 1-to-3-bedroom units, was completed in 1941 with funding from the United States Housing Authority. It was designed by Warren, Knight & Davis architects, and consists primarily of 55 two-story brick-clad, gable-roofed buildings spaced around alternating paved parking lots and grass-covered lawns. The total construction cost was $1,977,233.23.

Each unit was furnished with hot and cold water, natural gas and electricity, all included under the rent payment. The Southtown Community Center, leased to the Community Chest of Birmingham operated as one of the first public day cares in the city.

In 1981 the concrete retaining walls on the south edge of the project were painted by artist Vance Wesson. His series of murals depicts mainly flowers and trees against a blue sky. Between 2001 and 2003 the housing units were renovated in a $15 million project that included new air conditioners and gas furnaces as well as street paving and other improvements.

In the early 2010s sisters Norma and Irma Parks began decorating the outside of their units near the corner of 23rd Street and University Boulevard with Christmas lights every Thanksgiving weekend.

As of 2017, Southtown Court is 96% leased, with 436 of its 455 units occupied. The complex is managed by Bessie Word. The Southtown Resident Council is presided over by Irene Johnson.

Redevelopment of the community, which had come to be viewed as "blight", had been proposed many times.

In 2008 Mayor Larry Langford proposed a $28 million project to redevelop the Southtown site as a mixed-use commercial district, with existing residents moved to newly-built housing in Titusville or given Section 8 vouchers. The Birmingham Housing Authority Board rejected Langford's proposal by unanimous vote in April 2009.

In September 2015 HABD announced that it planned to apply in 2016 for a $30 million federal "Choice Neighborhood" grant to redevelop Southtown as a mixed-income community, similar to the Park Place and Tuxedo Terrace redevelopments. In January 2017 the authority selected the Southside Development Co. as a development partner.

A discrimination suit was filed on behalf of five residents alleging that the HABD's plans violated the Fair Housing Act. That suit was dismissed by Judge Abdul Kallon in February 2018.

The Southside Development Co. updated HABD with a presentation of three conceptual design options in August 2018. HABD director Marcus Lundy expressed the authority's commitment to secure permanent residences in the new development for all current residents who wished to return.

In May 2019 the developer showed preliminary renderings of a master plan developed by Gensler architects and planners for a mixed-use, mixed income district with up to 560 housing units (of which 220 would be designated as "affordable") along with 850,000 square feet of office and commercial space tailored for bioscience, medical research and medical offices. Retail spaces would include a grocery, "junior big box" and various neighborhood businesses. The Birmingham City Council approved rezoning for the project in April 2021. Demolition began on December 17.