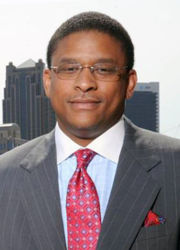 Marcus Lundy Jr (born c. 1967 in Birmingham) is a vice president and procurement and supplier diversity manager for Regions Bank, an ordained minister at Living Stones Temple, and one-term representative of District 9 on the Birmingham City Council.

Lundy graduated from West End High School in 1985 and earned his bachelor of science in secondary education in 1998 at Alabama A&M University, where he played football, ran track, and earned spots on the dean's and president's lists for academic achievement.

Lundy worked in human resources for several Birmingham businesses before moving to Richmond, Virginia to work for Wachovia Securities. He founded his own staffing firm, Cardinal Resource Group, in 2009. In 2011 he returned to Birmingham to accept the position of vice-president of education and workforce development for the Birmingham Business Alliance. In June 2013 he left to take his current position. He has also served as a principal of the Cardinal Resource Group.

Lundy was elected to represent Birmingham City Council District 9 in the 2013 Birmingham municipal election. After the December 2015 Council committee realignment he was appointed to chair the Economic Development, Budget & Finance committee and to serve on the Administrative/Technology committee.

On December 15, 2015, Lundy and Mayor William Bell were involved in a physical altercation at City Hall. In May 2017 he announced his intention not to run for a second term. Other council members speculated that his bank career was threatened by Mayor Bell. He seemingly alluded to the Mayor in his announcement, saying, "This is not something you should be doing for 40 years," and "Y’all won’t have Lundy to beat around no more," but did not confirm the rumors of a threat.

Lundy is married to the former Phedra Britton and has three children.