West End High School was a high school in the Birmingham City Schools system located on a 12.5-acre site at 1840 Pearson Avenue Southwest in West End. The red-brick school was built in 1930 to designs by the noted firm of Warren, Knight & Davis with David O. Whilldin and an outside consultant. It adjoined Robert E. Lee Elementary School. 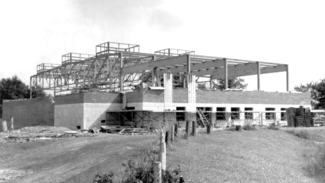 West End's athletic teams were known as the Lions. The school's yearbook was entitled the Resume.

In 1949 Warren, Knight and Davis completed plans for the auditorium constructed on the top floor of the main building and a new gymnasium to be constructed to the west of the school, connected by a covered walkway.

The school, which was open originally to white students only, was integrated in 1963. Due to a walk-out by white students, Patricia Marcus and Josephine Powell arrived to a mostly empty school for their first day of classes on September 11.

In 2001 then-superintendent Johnny E. Brown proposed merging West End High School and Wenonah High School into a new high school in Oxmoor Valley. The Board of Education approved the name 'Martin Luther King, Jr High School" for the new building, but the consolidation plan was successfully opposed by community groups who feared that vacating the old buildings would damage their neighborhoods.

Part of the school was damaged by a fire which broke out in the basement on January 24, 2003. It was suspected that the fire was intentionally set.

Under a 2008 school consolidation plan proposed by acting superintendent Barbara Allen and approved by the Board, West End High closed after that academic year with students transferring to Wenonah, Parker and Jackson-Olin High Schools.

The closing was marked by a ceremony on June 7 with a parade, pep rally, picnic and alumni basketball game. A contract with Meredith Environmental Inc. for demolition of the school building was approved by the Board of Education on December 9, 2008 and began the following March.