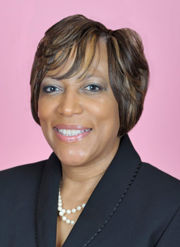 Wardine Towers Alexander (born July 26, 1955) is a former medical technician and the appointed representative of District 7 on the Birmingham City Council. She was president of the Birmingham Board of Education from 2015 to 2017.

Alexander graduated from Wenonah High School in 1973 and attended the University of Alabama before she earned a bachelor of science in medical technology at UAB in 1978. She was board certified as a medical technologist with a specialty in blood banking and work in clinical laboratory medicine. She worked as a training manager at the American Red Cross before moving to a similar role at BioLife Plasma Services. She was a one-time president of the Alabama State Association of Blood Banks before she retired in 2016.

In March 2013 Alexander was appointed to represent District 7 on the Board of Education, filling a vacancy left after the resignation of Alana Edwards Haynes.

Alexander applied for the vacant District 7 seat on the Birmingham City Council after the resignation of Jay Roberson in September 2018. The council split on whether to appoint her or Lonnie Malone in their October 16 meeting. After Steven Hoyt changed his vote, she was appointed by a 5-3 majority on October 30 and sworn in the same day. Her new position required her to step down from the library board.

In 2020 Alexander was admitted to a fellowship from Mitch Landrieu's E. Pluribus Unum Fund, to support a project aimed at reducing inequity and discrimination in the city.