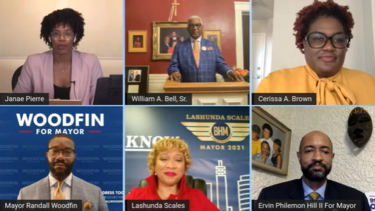 It was the third concurrent ballot for Mayor and City Council after the election cycle for Mayor was changed by state law in 2010. The election was held prior to redistricting from the 2020 U.S. census.

Candidates were allowed to begin fundraising one year prior to election day on August 24, 2020. The official qualification period for candidates was between June 25, 2020 and July 10, 2021. The certification of the election results is scheduled to take place on August 31, 2021.

36,791 of Birmingham's 145,564 registered voters appeared at the polls, for a turnout of 25.3%. Votes were collected at 68 precincts. In the mayoral race, incumbent Randall Woodfin earned a commanding 64% of votes cast in an 8-way race to win a second term outright. He garnered at least 50% of the vote in every precinct, but saw his strongest support in the southern and eastern parts of the city, topped by two Avondale precincts where he won 87% of the vote.

All of the incumbents running for city council finished at the top of the ballot, but sitting Council President and District 4 representative William Parker was forced into a run-off with J. T. Moore, while District 9 representative John Hilliard goes to the run-off against LaTonya Tate.

Two incumbents in the Birmingham Board of Education, Terri Michal (District 2) and board president Daagye Hendricks (District 4) were defeated by challengers Neonta Williams and Derrick Billups respectively. In District 1, Sherman Collins slightly outpolled incumbent Douglas Ragland, without enough votes to avoid a runoff matchup. Another runoff is scheduled between newcomers Le'Darius Hilliard and Jason Meadows in the District 9 seat left vacant by Sandra Brown's decision not to run.

Runoff elections in District 1, District 4 and District 9 will be held on October 5, 2021. On a day marked by heavy showers, only 3,919 ballots were cast, representing about 8% of the 46,734 registered voters living in districts facing runoff elections.

Birmingham Board of Education

Note: Where a candidate's nickname is present, that is how their name was shown on the ballot.

The following is a list of candidates announced their intent to run, but either failed to qualify or withdrew their run.

Randall Woodfin announced his re-election campaign for the Mayor's office on August 25, 2020 and held a campaign kick-off event on January 30 at George Ward Park. Steven Hoyt, current District 8 representative, and Darryl Williams, announced their bids for the Mayor's office during the week of August 24, 2020. Chris Woods announced his candidacy on January 13, 2021, followed by Lashunda Scales on Martin Luther King Jr Day, January 18. Former mayor William Bell confirmed his intention to run on February 2. Cerissa Brown formally announced her candidacy for Mayor at Legion Field on February 13. E. Philemon Hill entered the race in May.

A "Mayoral Town Hall Debate" sponsored by the Jefferson County Millennial Democrats and moderated by Dana Woodruff was held at the Lit in 8th nightclub on June 24. Woodfin, Scales, Bell and Woods were invited to participate.

Those four also appeared in an August 13 debate sponsored by WVTM and WATV which was moderated by Lisa Crane (link).

An online debate co-sponsored by Al.com, The Birmingham Times, Summit Media, CBS 42, and the Birmingham Association of Black Journalists was held on August 17 with all mayoral candidates invited to participate. Janae Pierre moderated that debate, with questions from a panel which included Roy S. Johnson, Barnett Wright, Sherri Jackson, Cody Short and Shelia Smoot. Woodfin, Scales, Bell, Brown and Hill participated. Woods was unavailable and Gonzalez was unable to participate due to technical difficulties. A number of topics were discussed during the event, but Woodfin's "Birmingham Promise" attracted the most comment from challengers who viewed the program as self-serving and a drain on public school funding.