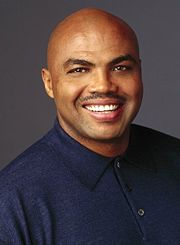 Charles Wade Barkley (born February 20, 1963 in Leeds) is a former Auburn Tigers and professional basketball star, named Most Valuable Player of the National Basketball Association in 1993 and as one of the "50 Greatest Players in NBA History" in 1996. Barkley won Olympic gold medals with the U.S. Dream Teams in the 1992 and 1996 Olympic Games.

After retiring from the NBA, Barkley has made frequent appearances as a sports commentator, an outspoken celebrity, and an avid amateur golfer. He flirted with running for Governor of Alabama in 2006, and has been a supporter of numerous charitable causes, including a $1 million donation to Miles College in 2020.

Barkley played college basketball at Auburn University for three years where, although he was overweight, he excelled as a player, being named All-SEC and leading the league in rebounding each year. He mainly played center, despite his height, which is generally thought to be less than the "official" figure of 6'-6". His nickname "The Round Mound of Rebound" dates back to his college career.

He left Auburn after his junior year to begin playing in the NBA with the Philadelphia 76ers, filling the spot left by Julius Erving on the team. Later teaming with power forward/center Rick Mahorn, the two coined the nickname "Thump and Bump", the Sixers made the Eastern Conference Semifinals in 1990 and 1991 but were eliminated by the Chicago Bulls both years. The team reached the playoffs with Barkley every year except for 1988, and 1992. He averaged 24.3 points per game while with the team.

Barkley was a force under the glass, and his aggressiveness often times got him into shoving matches with opponents such as Patrick Ewing, Shaquille O'Neal, and Charles Oakley. His 1990 fight with Detroit Pistons center Bill Laimbeer created headlines.

During his last season in Philadelphia, Barkley wore #32 instead of 34 in honor of Magic Johnson, who had announced prior to the start of the season that he was HIV-positive. The 76ers had retired the number 32 in honor of Billy Cunningham, who gave his permission for Barkley to make the gesture. Barkley took the opportunity to make a rare apology, rebuking himself for having made fun of AIDS sufferers.

After joining Larry Bird, Magic Johnson, and friend Michael Jordan for the "Dream Team" that won the gold medal at the 1992 Olympics in Barcelona, Barkley was traded to the Suns, where he became a vital part of the team's trip to the 1993 NBA Finals, scoring 25 points per game and becoming one of the most popular players on the team. At the Finals, Barkley and the Suns lost to the Chicago Bulls in six games, after Barkley had told Jordan that it was destiny for the Suns to win the championship. Barkley would never again play in the Finals.

In 1994, the Suns lost in the Western semi-finals in 7 games to the eventual NBA champion Houston Rockets. In 1995, the Suns suffered exactly the same fate. In 1996, Barkley and the Suns struggled to a 41-41 record, having to win 13 games in a row at the end to squeeze out a playoff spot. Following a public dispute with team owner Jerry Colangelo, Barkley was traded to the Houston Rockets. Barkley's #34 jersey was retired by the Suns in 2004.

Before joining the Rockets, Barkley played for the gold medal winning American team at the 1996 Summer Olympics in Atlanta. He then joined teammates Hakeem Olajuwon and Clyde Drexler in Houston. As a member of the Rockets, Barkley faced nagging back injury problems, which ultimately led to his retirement from the NBA in 2000.

Barkley announced his plans to retire after the season during an exhibition against the Detroit Pistons at the BJCC Coliseum. During that season he averaged 14 points a game over 19 outings before tearing his left quadriceps tendon completely away from his kneecap during a game on December 8, 1999. He was told by doctors that he would never play again in the NBA, but was able to come back a little over four months later, for exactly one game, scoring a basket in front of Houston's home fans on April 19, 2000 against the Vancouver Grizzlies. Barkley retired immediately after that game. As he had announced at the beginning of the season in Birmingham, he donated $1 million each to Leeds High School, Auburn University, and Cornerstone Schools of Alabama.

During his stint as a member of the Suns, Barkley was controversial and outspoken. He was rumored to have dated Madonna, and he became a favorite of late-night TV talk shows. He published a pair of equally controversial books (Outrageous! and Sir Charles: The Wit and Wisdom of Charles Barkley). He was in the middle of many lawsuits. One of the most infamous lawsuit involving Barkley was in incident where he threw a man through a glass window during an altercation at an Orlando restaurant. When asked if he had any regrets about throwing the man through the window, Barkley said "I regret we weren't on a higher floor."

Barkley now works as a studio analyst on Inside The NBA for Turner Network Television and plays at celebrity golf tournaments. He made several appearances in the short-lived series "Clerks, and appeared in the films Space Jam, Hot Shots! and Look Who's Talking Now.

At a July 2006 meeting of the Southern Regional Conference of the National School Boards Association in Destin, Florida, Barkley lent credence to the idea of his running for Governor of Alabama: "I'm serious. I've got to get people to realize that the government is full of it. Republicans and Democrats want to argue over stuff that's not important, like gay marriage or the war in Iraq or illegal immigration. ... When I run - if I run - we're going to talk about real issues like improving our schools, cleaning up our neighborhoods of drugs and crime and making Alabama a better place for all people." (Dean-2006)

Barkley provided major financial support to Donald Watkins, and is part-owner of Redmont Distilling Company. He has supported Miles College and made plans to replace dilapidated homes in Leeds with new houses.