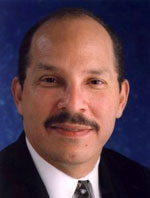 Donald Varnado Watkins Sr (born September 8, 1948 in Parsons, Kansas) is a former attorney, banker, investor and entrepreneur. He was one of the first African Americans to graduate from the University of Alabama School of Law and worked as Birmingham's city attorney under Mayor Richard Arrington. In the 1990s he was involved in efforts to construct waste-to-ethanol plants. He fraudulently solicited investments by misrepresenting his stake in the business and cultivated the impression that he was a billionaire, partly sustained by pursuing purchases of professional sports teams.

Watkins grew up as the fifth of sixth children of the late Levi Watkins, longtime president of Alabama State University, and his wife, the former Lillian Bernice Varnado, a schoolteacher and homemaker. Donald's older brothers, Levi Jr and James, both became surgeons. His sisters; Marie, Pearl and Doristine; are a mathematician, musician and grade-school principal respectively. Donald apprenticed for several summers at his grandfather's plumbing company in Clarksville, Tennessee.

Watkins enrolled at Southern Illinois University intending to become an architect, but switched and entered law school at Howard University in 1970. He transferred to Alabama on an NAACP scholarship, becoming a member of the second integrated class in law school there. After graduating in 1973 he moved to Montgomery to begin his practice in the office of Fred Gray. As a young lawyer he convinced a state parole board and Governor George Wallace to pardon Clarence Norris, the last of the "Scottsboro Boys" convicted of rape under questionable circumstances in 1931.

Watkins operated a chain of check-cashing stores and later won a seat in the Montgomery City Council. During his tenure on the Council, Watkins frequently clashed with Mayor Emory Folmar. Nevertheless, Folmar later hired Watkins as city attorney.

In 1979 Watkins established his own law practice. Beginning in 1985 Watkins began serving as special counsel to Birmingham Mayor Richard Arrington, defending the city against lawsuits as well as representing Arrington during federal corruption investigations that he claims were racially-motivated, casting prosecutor Frank Donaldson as the new "Bull Connor". As city attorney, Watkins' trial record was 37 victories in 38 cases, during which time he reportedly earned nearly $9 million in fees from the city.

In 1990 Watkins offered to join the Shoal Creek Golf Club whose all-white membership attracted criticism during its hosting of the 1990 PGA Tournament. The club instead invited Booker T. Washington Insurance Company president Louis Willie to accept an honorary membership.

In 1991 he represented Auburn University defensive back Eric Ramsey in a case that led to the resignation of head coach Pat Dye and NCAA probation for the team.

On July 31, 1998 Watkins purchased the Baltimore, Maryland-based Pencor Orange Corporation for $600,000, creating Watkins Pencor. Pencor Orange controlled a 25% stake in Pencor Masada OxyNol, a technology company founded by Watkins' college friend Daryl Harms as an outgrowth of his Masada Resource Group. Masada was pursuing a municipal waste to ethanol fuel production facility in Middletown, Orange County, New York. Officials from Middletown had toured a demonstration facility in Muscle Shoals and agreed in 1997 to permit the project on a former landfill.

Watkins also began petitioning the City of Birmingham to contract with the company for an ethanol plant at the North Birmingham Landfill. Under the terms of the proposal, the city would lease the site to Masada for $1 a year over 99 years, and pay the company a tipping fee of $41 per ton (a 50% premium over the prior burial cost) for disposing of waste there. Incoming mayor Bernard Kincaid did not support the project. Though the Birmingham City Council agreed to give the matter more scrutiny, Watkins withdrew the proposal to focus on the New York plant.

In 2000, Watkins founded Alamerica Bank with headquarters at 2170 Highland Avenue. Some of Watkins' other businesses, including the Masada Resource Group, operated from offices in the same building.

Watkins gained national attention 2002 when he began looking to buy a Major League Baseball team. He inquired about the Tampa Bay Devil Rays first, then proposed buying the Montreal Expos and moving them to Washington D.C. Soon later he entered in negotiations with Carl Pohlad to purchase the Minnesota Twins for $150 million. Watkins offered to build a new $350 million retractable-roof ballpark and entertainment district in Minneapolis without taxpayer funding as part of the deal, but questions about his ability to raise the cash led the team to back out. In April he offered $200 million for the Anaheim Angels.

Though he had retired from active practice in 1999, Watkins agreed, at Richard Arrington's suggestion, to take the helm of the legal team defending HealthSouth founder and CEO Richard Scrushy on federal fraud charges under the Sarbanes-Oxley Act in 2003. His strategy involved appealing to jurors in the terms of the Civil Rights struggle and portraying prosecutors as part of a government conspiracy. Scrushy was acquitted on all counts. After the trial concluded, Watkins moved to Atlanta, Georgia. He also claimed to have relocated to Miami, Florida in order to gain "access to international players."

After Daryl Harms died from cancer in 2005, Watkins negotiated an option to purchase partner Terry Johnson's share of Masada Oxynol for about $5 million. He never raised the funds to execute the option, instead hoping to take cash out of the company once it succeeded in generating revenues or was sold to another company. To cover operational expenses and to sustain his personal lifestyle, Watkins began soliciting "investments" from friends and from several professional athletes. Very little of those payments were used for actual operations. Instead they were used to repay other debts, many of which were personal. In addition, Watkins pressured his mentor, Arrington, to take out loans from Alamerica Bank and then loan the money to him, circumventing banking regulations limiting the amount he could borrow from his own bank.

In 2006 Watkins, who had left the Democratic party to become an independent in 1998, launched the Voter News Network which called for voters to choose candidates based on their qualifications rather than party affiliation. He also launched the Children's Bank, which provided investment capital for business plans drawn up by children under 18 years of age. In February 2008 Watkins took control of a 77% stake in the troubled Tradewinds Airlines by agreeing to guarantee $30 million in loans from the airline to two Detroit municipal pension funds and to invest $10 million in the company. The company filed for bankruptcy protection in July 2008, after Watkins was sued by the pension funds for allegedly failing to live up to his agreements. Watkins claims that fund officials wrongly claimed default after he refused unethical requests for cash and the use of aircraft.

In 2012 Watkins' Nabirm LLC, a subsidiary of Masada Resource Group, signed an exclusive contract with the government of Namibia to mine and sell uranium from that country. A year later he negotiated another option for the remaining 50% ownership stake in Masada Oxynol with Clarissa Harms, Darryl Harms' widow. At that point he could have exercised those options for $10 million and repaid his "investors" for around %15 million, leaving himself with any other proceeds from the profits or sale of the company. He had solicited interest from Waste Management Inc. of Houston, Texas for a sale, but was unsuccessful.

In 2015 Watkins began posting articles on Facebook and later to his personal website detailing, among other things, rumors about a love affair between then Governor Robert Bentley and his assistant, Rebekah Mason. The then-unsubstantiated rumors contributed to public interest in the case, which eventually led to Bentley's resignation. Watkins has continued to publish and has credited attempts to silence him as the root of some of the allegations against him.

In 2016 the U.S. Securities and Exchange Commission filed a criminal complaint against Watkins in alleging that he had defrauded investors, including several professional athletes, by soliciting funds in exchange for "economic interests" in Watkins Pencor or "promissory notes" relating to Masada Resource Group, and then using the money to pay personal debts and fund personal expenses. Among those deposed in that case were former NBA star Charles Barkley, who claimed to have lost more than $6 million to Watkins.

In November 2018 Watkins and his oldest son, Donald Jr, were indicted on federal charges of wire fraud, bank fraud and conspiracy relating to the same allegations. They were also charged with recruiting Richard Arrington to take out loans for them from Alamerica Bank. Both defendants chose to represent themselves in Judge Karon Bowdre's court. On March 8, 2019 Watkins Sr was convicted on all counts, and his son on one count each of bank fraud and conspiracy. Watkins Sr was sentenced to 60 months in prison and another 5 years of probation, and to pay $14,000,100 in restitution.

In August 2021 Watkins was ordered to pay $1.5 million to political consultant and Matrix founder Joseph Perkins for defaming him on his weblog. Perkins brought the case in 2017.

Watkins has four children, Donald Jr, Drew, Derry and Dustin by his first wife, DeAndra, and one, Claudia, from another relationship.