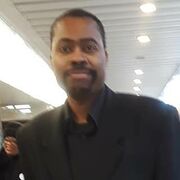 Williams was the third of five children born to Albert Williams Sr and the former Dorothy Leon Hampton. He graduated from Parker High School in 1992 and earned a degree in finance at Alabama State University in 1996. He founded his Greater Works Business Services web design firm in 1998 and married the former Sheona Billesha Tibbs in 2001. During the Gulf War, Williams served in the U.S. Army, stationed at Fort McClellan. and enrolled at Liberty University in Lynchburg, Virginia. He founded Great I Am Ministries Outreach International in 2003 and graduated from Liberty in 2008. He has also taken on-line courses in biblical studies from Grace and Truth Bible Institute and completed a certification as a counseling practitioner from Achology: The Academy of Modern Applied Psychology. He previously served as a pastoral care counselor for Church of the Highlands.

Since returning to Birmingham in 2016, Williams has worked as a sales associate at Wal-Mart and Lowe's and volunteered with Junior Achievement through his involvement at True Light Missionary Baptist Church. As a community activist he co-founded the Voters Legal Justice Watch Group and is a member of Faith in Action Alabama, Our Revolution Birmingham, the Poor People's Campaign, Alabama Arise, Neighborhood Advocates for Justice, and Birmingham United Neighborhoods. He also participated in pushing for the 35th Avenue Superfund Site to be included on the National Priorities List.

In 2017 Williams lobbied against the proposed relocation of the Greater Birmingham Humane Society to the Trinity Park site in Titusville and called for implementing the Titusville Community Framework Plan. Following the 2018 Riverchase Galleria shooting, he helped to organize a boycott and acted as a legal observer during ongoing protests in Hoover.

Williams challenged incumbent Sheila Tyson for Birmingham City Council District 6 in the 2017 Birmingham municipal election. He was motivated to run by a desire to end the antagonism and secrecy he perceived in City Hall. Williams finished last in the three-way race, with 210 votes.

In 2018, after Tyson left her Birmingham City Council seat vacant to be sworn into the Jefferson County Commission, Williams applied to be appointed by the Council to fill her seat.

Williams was elected vice president of the North Titusville Neighborhood Association in 2018 and re-elected in 2021. That year he spoke out against a proposal for a Sherman Industries concrete plant in Five Points West. During the 2020 Coronavirus pandemic he was active in securing and delivering emergency supplies and relief funds. He also supported the RWDSU Mid-South Council's efforts to unionize workers at the Bessemer Amazon Fulfillment Center.