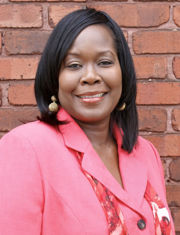 During the 2007 Birmingham mayoral election Tyson served as campaign manager for Patrick Cooper.

During the 2008 general election Tyson's Alabama Coalition helped to re-register freed ex-felons who had been unlawfully purged from voter rolls and also registered prisoners in local jails who were qualified to vote by absentee ballot.

Tyson ran for the Birmingham City Council District 6 seat held by Carole Smitherman in the 2009 Birmingham City Council election. In the campaign, Tyson's primary issue was improving the quality of life in her district by addressing the problems of abandoned houses, crime and business closures. Her campaign got an early start airing radio ads accusing Smitherman of ignoring the district's needs. During the runoff election questions arose about the educational claims made on her website, specifically whether her training with the Army qualified as a "degree". She said she used the term as a simplification of the military certification she actually received.

Tyson also reported harassment during the runoff election, blaming supporters of incumbent Carole Smitherman for personal intimidation, destruction of yard signs, and perhaps even for leaving a dead cat at her doorstep. Although she forced Smitherman into a runoff, Tyson lost it by a margin of 98 votes (approximately 2.6%).

Smitherman resigned from the council in 2012 to become a Circuit Court Judge. In her successful campaign to claim the vacated seat in the 2013 Birmingham municipal election, Tyson spoke of expanding services to low-income homeowners and improving parks in the district.

After the Council's committees were restructured in December 2015, Tyson was appointed chair of the Public Improvement Committee and assigned to serve on the Park & Recreation and Public Safety & Transportation committees.

Tyson has been active in protests aimed at preventing the closure of Cooper Green Mercy Hospital and the sale of the Jefferson Rehabilitation Health Center. In the 2014 Democratic primary Tyson mounted a failed challenge to incumbent Sandra Little Brown for the District 2 seat on the Jefferson County Commission.

In June 2016 Tyson argued against a proposal for the city to remove some landscaping on 19th Street North for a Birmingham Holocaust Memorial Garden, paid for by donors to the Birmingham Holocaust Education Center. She compared the request to failed attempts to win public funding to improve the privately-owned Shadow Lawn Cemetery, which she erroneously called, "the oldest cemetery in the world." In a later statement, Tyson clarified that she was bothered that her efforts to help Shadow Lawn Cemetery had been stopped by the city's legal department while this project was approved. She said that the city would have to "commit to the exploration of creating an appropriate and quiet space to reflect on the life of those who fought so hard to create the Birmingham that we get to enjoy today," before voting in favor of the proposal.