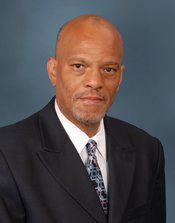 Emanuel B. Ford (born c. 1959 in Birmingham; died November 16, 2014 in Birmingham) was a hospitality manager at the Hilton Birmingham Perimeter Park and representative for District 5 on the Birmingham Board of Education. He was also a president of the East Thomas neighborhood, the Smithfield community and Birmingham's Citizen Advisory Board.

Ford's mother died when he was four and he was adopted by a great aunt and uncle. He grew up in East Thomas and attended Parker High School for two years before graduating from Kecoghtan High School in Hampton, Virginia in 1977. Later he studied culinary arts at Jefferson State Community College.

Ford ran unsuccessfully for the Birmingham Board of Education in 2002 and 2005. He ran unsuccessfully as a Democratic candidate for Alabama House of Representatives District 54 in 2006. Much of his campaign funding came from George Barber and Barber Companies, developers of the The Crest on Red Mountain. As president of the CAB, Ford argued for the Birmingham City Council to approve the rezoning required for the project to move forward. He also lambasted Council member Valerie Abbott (an opponent of the rezoning) for her employment with a subsidiary of BellSouth, which he labeled a violation of Birmingham's Mayor-Council Act.

Ford was succeeded as CAB president by West End community president Sheila Tyson in January 2009. In the 2009 city election Ford again ran against incumbent Dannetta K. Thornton Owens for the District 5 seat on the Birmingham Board of Education, this time defeating her by a narrow margin of 47 votes (2.3%).

Ford was a 1999 graduate of Leadership Birmingham. On August 11, 2005 he filed suit against the City claiming false arrest and excessive use of force. The suit was dismissed by summary judgement.

After the 2010 census, Ford campaigned to remain on the Board of Education in District 9, but lost to Sandra Brown. During the campaign, he expressed faith that the schools were making great strides despite economic challenges.

Ford died from lung cancer in November 2014. He never married, but was survived by two sisters and several nieces and nephews.