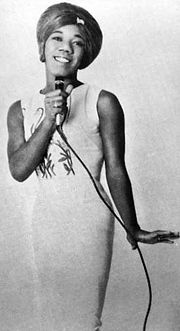 Mitty Lene Collier (born June 21, 1941 in Birmingham) is former soul and blues singer. She was ordained as a minister in 1989 and founded More Like Christ Ministries in Chicago in 2003.

Mitty was the seventh child of Rufus and Gertrude Collier, and attended Western-Olin High School, Alabama A&M College and Miles College where she majored in English. She began singing in church as a teenager, and toured with the Hayes Ensemble and the Lloyd Reese Singers, before starting to sing rhythm and blues in local clubs to help subsidize her college education.

In 1959, while visiting Chicago, Collier entered Al Benson's talent show at the Regal Theater, winning for six straight weeks and gaining a slot on a bill with B. B. King and Etta James as a prize. This brought her to the attention of Ralph Bass of Chess Records, who offered her a recording contract. She recorded for the Chess label from 1961 to 1968, releasing 15 singles and one album, mostly produced by Billy Davis.

Collier's first record was "Gotta Get Away From It All", which was not a hit. Her first real success came in 1963 with "I'm Your Part Time Love", an answer record to Little Johnny Taylor's "Part Time Love". It reached #20 on the Billboard R&B chart, and was followed up with "I Had a Talk With My Man Last Night", a secularized version of James Cleveland's gospel song "I Had a Talk With God Last Night". The orchestrated ballad reached #41 on the Billboard Hot 100 and #3 on the Cash Box R&B chart, and became her best known song, later covered by Dusty Springfield and Shirley Brown among others.

Collier left Chess in 1968 after releasing a single, a new version of "Gotta Get Away From It All" which she recorded at FAME Studios in Muscle Shoals with producer Rick Hall. She then recorded five further singles and an album with William Bell's Peachtree label in Atlanta, Georgia. However, in October 1971 she developed polyps on her vocal cords, losing her singing voice.

Collier subsequently gave up her music career and took a job as an editorial assistant for the Journal of Chemical Physics in the Department of Chemistry at the University of Chicago. She devoted the rest of her time to Christian ministry. She earned a degree in evangelism from the uncredited Bold Christian University in Arlington, Texas. She eventually recovered her voice, which she attributes to a miracle from God, and began recording gospel songs, beginning with a cover of Cleveland's original "I Had a Talk With God Last Night."

She founded the Bible Study Telephone Prayer Line in 1983 and a "Feed-A-Neighbor" program in 1985. She began preaching in 1987. On July 26 of that year she accepted a Key to the City of Birmingham from Mayor Richard Arrington, Jr, recognizing her humanitarian efforts in her adopted city of Chicago. She was ordained in the Community Church in 1989 and founded the "More Like Christ (MLC) Christian Fellowship Ministries" with Saturday services aimed at the homeless population. She also wrote two plays, "Who Else But God?" and "From Man to God", the latter a dramatization of her own life.