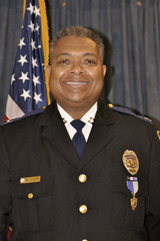 Moody Duff (born c. 1958) is a former Birmingham Police officer who retired as Deputy Chief of the Department's Field Operations Bureau on May 17, 2013.

Duff grew up in Roosevelt City and graduated from Wenonah High School in 1976. He was interested in becoming a scientist when he enrolled at UAB. He became interested in criminal justice as a career while in college. After graduating he worked for the UAB Police Department.

Duff joined the Birmingham Police Department in 1983 and patrolled in the West and East precincts before serving in the Robbery, Burglary, and Internal Affairs units. He also served as the department's Public Information Officer under Mike Coppage. He was promoted to deputy chief by A. C. Roper in July 2011. He was charged with effecting large-scale reorganization of Field Operations, and the annual implementation of Operation Crackdown to hold down celebratory gunfire on New Year's Eve and July 4.

In retirement, Duff planned to pursue gardening and cooking, to learn Spanish, and to volunteer and mentor youth. He and his wife, Glenda, have one daughter, Faith.