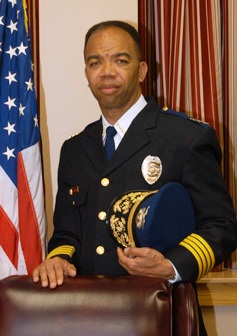 A. C. Roper Jr (born November 6, 1963 in Birmingham) is a Lieutenant General in the U.S. Army Reserve and deputy commander of the United States Northern Command at Peterson Air Force Base in Colorado. He served as Chief of the Birmingham Police Department from 2007 to 2017.

Roper grew up in the Birmingham neighborhoods of Acipco and Fountain Heights. He graduated from Phillips High School, where he was a member of the Junior ROTC and went on to study for two years at UAB before joining the Montgomery Police Department as a patrol officer. While in school he shucked oysters at Rockefeller's on Southside.

In 1988 Roper joined the Hoover Police Department. He rose through the ranks at Hoover, working as a patrol officer, narcotics investigator and traffic sergeant before being promoted to training lieutenant. From there he became commander of the traffic and patrol divisions for three years, then commander of investigative services for another two years, and was promoted to Assistant Chief in April 2005. Meanwhile he continued his training at the FBI National Academy and the Southeastern Law Enforcement Executive Development Program.

Prior to accepting his current position, Roper commanded the 80th Training Command in Richmond, Virginia. He previously served with the 81st Regional Readiness Command and the 87th Regional Support Group East, based in Hoover. He was deployed during the Gulf War and in the Operation Enduring Freedom, where he served as a spokesman for all U.S. Army personnel in Afghanistan. He has been awarded the Bronze Star, the Meritorious Service Medal, and the General Douglas McArthur Leadership Award. The Hoover Chamber of Commerce awarded him their 2007 "Freedom Award".

Roper was Assistant Chief of the Hoover Police Department when he was named by Larry Langford to succeed Annetta Nunn, who retired shortly after meeting with the Mayor-elect following the 2007 election. He was sworn in at the Birmingham Museum of Art on November 30, 2007.

He has described his approach to crimefighting as "zero-tolerance", recognizing the value of attacking low-level crimes to overcome a "culture of lawlessness" in some communities, to earn the respect and support of the general population, and, often, to get breaks in bigger cases. He cites personnel turnover, inadequate recruiting and insufficient funding for personnel and equipment as challenges for his administration. He presented a plan for overhauling the department and its operations at the end of January 2008. After a year on the job, he reported a small drop in the overall and violent crime rates and expressed confidence that a foundation was in place on which to build future successes.

Roper submitted a letter of resignation to newly sworn-in Mayor Randall Woodfin in November 2017. He agreed to remain in office until Woodfin appointed a replacement. In February 2018 Woodfin named Orlando Wilson as interim chief. Patrick Smith was hired as Roper's permanent successor in April.

Roper served on the boards of the Literacy Council of Central Alabama and the Shelby County Children's Advocacy Center. In 1997 Roper became an ordained minister and volunteered as an assistant pastor at the Faith Chapel Christian Center in McDonald Chapel. He and his wife, Edith, also taught a weekly Bible study at Bluff Park Community School. The couple have two daughters, Krystle and Amber.

In June 2018 Roper was appointed Deputy Chief of the U.S. Army Reserve.