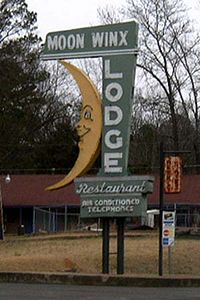 The Moon Winx Lodge (formerly Moon Winx Motor Court) was a tourist motel and restaurant located in the Alberta City neighborhood of Tuscaloosa along University Boulevard (Highway 11). In operation since the 1920s, although the property has since declined as a popular lodging option in Tuscaloosa, its neon sign fronting University Boulevard still remains a famous local landmark. The on-premises restaurant is no longer open but was at points previously called The Barn and Lamplighter Restaurant.

Operating originally as the Moon Winx Motor Court, the facility opened in the late-1920s with a maximum capacity of 56 guests in its 20 rooms. Owned originally by Meade Johnston, in 1946 he sold the motel to Victor Rogers, who in 1949 announced an expansion of the facility. Opening in January 1950, the $10,000 expansion added twelve air conditioned rooms with a capacity of 24 additional guests.

In March 1954 a complete renovation and modernization of the motel was completed with the original structures being clad with brick and air conditioning added to all of its 36 guest rooms. In being one of the most modern motel facilities in the region, the Moon Winx was featured on the cover of the March 1961 edition of the national Tourist Court Journal. The motel, now owned by Jay Patel, remains in operation.

In 1957, the motel's landmark neon sign was installed along University Boulevard. It was designed by Gordo artist Glenn House who spent about three hours painting the winking crescent moon face for advertiser Dan Kilgo. The Rivers Sign Company fabricated the neon lights and secured the finished sign in place.

In 2012, Druid City Brewing Company opened for business with the likeness of the Moon Winx sign utilized prominently in their logo.

In 2016 Patel offered the neon sign for sale. He explained that maintaining the sign in functioning condition was costing him around $300 a month and that following the retirement of Cliff Flora of Flora Sign Co., it was getting harder to find technicians willing to work on it.