Motus Motorcycles was a motorcycle manufacturer which was launched at the Innovation Depot. The company was founded by entrepreneur Lee Conn and former Confederate Motorcycles designer Brian Case with plans to develop a sport touring motorcycle. They have designed a 1650cc liquid-cooled V4 engine, unique in the motorcycle industry. It was engineered by Pratt & Miller and Katech Engines of Detroit, Michigan.

In March 2012, Motus unveiled their first two models at events at Pratt & Miller in Detroit and at the Barber Museum of Motorsports. Conn and Case toured 250 cities on their first bikes, beginning at Daytona Bike Week. Limited production of the motorcycles began before the end of that year at an assembly plant near the Motorsports Park.

In March 2012 the company began seeking a site for a production facility which could begin building motorcycles for sale to the public. They eventually selected the former Barber Dairies building at 500 28th Street South. In July 2012 the company won approval from a Birmingham City Council committee for $75,000 in incentives to keep the company in the city. Signage was approved by the Birmingham Design Review Committee.

Tom Vaeretti was hired away from Honda of Alabama as the company's production manager. The first year of production was devoted entirely to filling existing factory orders, with 2013 models set to be completed at a rate of 20-30 per month. That same summer, the Motus MST-R sport-tourer was named "Best Dreambike" in Motorcyclist magazine's "2012 Motorcycle of the Year" issue.

In August 2014, Case and Conn participated in speed trials for 1650cc production motorcycles at the Bonneville Salt Flats in Utah. Their certified speeds of 163.982 and 165.813 miles per hour broke previous records in their categories of 127 and 132 mph.

The 2015 MST-T and MST-R, the first models sold to the public through dealerships, shipped in Fall 2014. The first bike off the line, serial number 1, was donated by the company to the Barber Museum. Ultimate Motorcycling magazine ranked the 2016 MST-R atop its list of the "Top 15 New Motorcycles Ridden In 2015."

In late August 2018 Motus's financial backers withdrew, forcing the company to shut down. 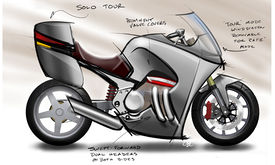 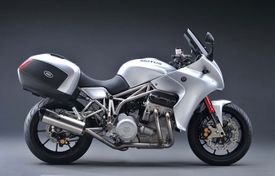