The present facility opened in 2007 in the former downtown Sears store at 1500 1st Avenue North, on the block between 1st and 2nd Avenue North and 14th and 16th Streets. The building was gutted and renovated at a cost of $17 million for the center. The architects for the renovation were Williams-Blackstock with Brice Building Company as the general contractor and Brantley Visioneering as the construction manager.

The building's architectural design won an Honor Citation from the Gulf States chapter of the American Institute of Architects and a Merit Award for Adaptive Reuse from AIA Birmingham. 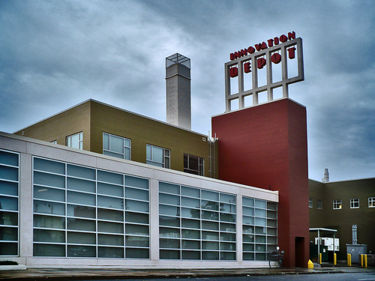 Innovation Depot rebranded and updated its programs and facilities in 2021. Telegraph Creative was commissioned for the brand refresh, with Kinetic Communications upgrading the center's website and smartphone app. Bendy Knees Design created a series of interior murals. Knight Eady's former offices were reconfigured as the Ignite co-working center. Innovation Depot also became a tenant in the building that replaced the Ramsay-McCormack building in downtown Ensley.