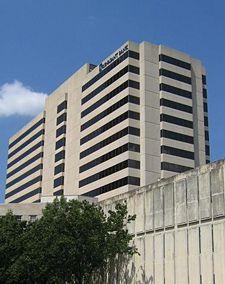 Renasant Place (formerly Park Place Tower) is a 15-story, 278,027 square-foot office tower at 2001 Park Place in downtown Birmingham. The building was designed by Cooper Carry of Atlanta, Georgia, and completed in 1980. It has an attached five-story parking deck with space for 343 cars.

In 2004 Archon Group sold the building to Allegiance Realty Corporation of Charlotte, North Carolina for $25.1 million.

In February 2008, Tupelo, Mississippi-based Renasant Bank announced that it would be consolidating its Alabama operations into the Park Place Tower. Corporate offices originally spread between Grandview Parkway, The Summit and Colonnade were relocated by June, and the branch previously in the Watts Tower was relocated that September. In May, the Renasant logo was affixed to the top of the tower. The building's name was officially changed to Renasant Place in November 2014.

In April 2010, the accounting firm Frost Cummings Tidwell Group announced it would be moving all of its employees onto the 9th floor of the tower. Archon put the building up as collateral on a $27 million CMBS loan from Bank of America in 2011. The loan was watchlisted as between 2017 and 2020 occupancy rate in the building dropped to below 65%, and took a further hit when Tidwell Group moved to the Grandview II building in May of that year. Midland Loan Services assumed the loan as a special server in anticipation of a default.

On June 1, 2021 the building was sold to a joint venture of Eightfold Real Estate Capital of Miami, Florida and Cicada Capital Partners of Memphis, Tennessee for $16.75 million. The $21.87 mortgage loan from Ladder Capital of New York City was calculated to provide financing for addressing deferred maintenance and other expenses. Among the planned improvements were replacement of the roof and chillers, and redesign of shared tenant amenities and of public areas at ground level.