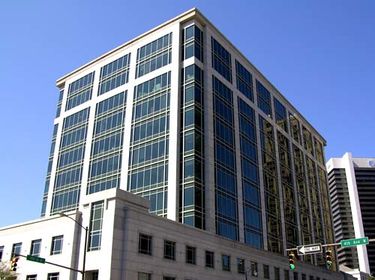 One Federal Place is an 11-story, 301,629-square-foot office and retail building located at 1819 5th Avenue North on the east side of the block between 4th and 5th Avenues North along 19th Street.

One Federal Place was developed by a partnership of Sloss Real Estate Group and Barry Real Estate of Atlanta, Georgia. MSTSD, Inc. of Atlanta was the architect and Nimrod Long & Associates designed the landscaping. Brasfield & Gorrie was the general contractor. Ground was broken on January 9, 2001 and construction was completed in 2002.

The building is clad in gray granite and blue-tinted glass and includes a lobby pavilion designed to complement the nearby Federal Reserve building and a 448-car parking garage. An outdoor plaza facing 5th Avenue includes a wall of water, vertical panels of greenery, and a pool lined with brightly-colored glazed tiles given to the City of Birmingham by the nation of Morocco. The building's design won an Award of Merit from the Georgia Chapter of the American Institute of Architects and the project was also honored by the Associated Builders and Contractors.

The lobby features a large painting by Talladega native Richmond Burton. Since June 2008 the building has been managed by the Brookmont Realty Group.

BGK Texas of Houston purchased One Federal Place in 2005 for $58 million. BGK was acquired by Santa Fe, New Mexico-based Rosemont Realty in 2010. In November 2012 Rosemont moved it to a different investment fund in an internal transaction valued at $44 million. In 2021 the building was acquired by Glenfield Capital of Atlanta, Georgia for $67 million.