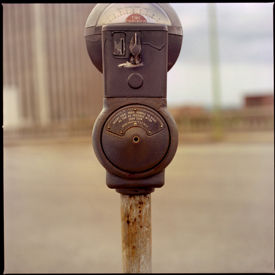 Parking meters in Birmingham are used to regulate the availability of parking spaces. The meters, numbering more than 3,000, are installed and maintained by the city's Department of Traffic Engineering.

In 1937 the Alabama Supreme Court ruled that the parking meters used by the city of Birmingham exceeded its legal authority to collect revenues and ordered them removed.

An October 1962 study by the Birmingham Department of Traffic Engineering indicated that the average downtown shopper parked for an hour and twenty minutes. Based on that study, the time limit on downtown meters was increased from one to two hours.

In 1963 the city removed all parking meters from the Woodlawn business district. The effect was seen to be positive, with increased commercial activity, but the cooperation of business owners in keeping employees from occupying public parking spaces was believed to be critical to that success. City Traffic Engineer Ben Robinson recommended that the same action be taken in the East Lake business district in 1965.

In November 1963 George Seibels, then chair of the Birmingham City Council's Public Safety Committee, proposed allowing free parking in the downtown area on Saturday afternoons, initially by calling a moratorium on issuing parking tickets for expired meters. Nina Miglionico expressed concerns that suspending metered parking would negatively impact downtown merchants and noted that doctors on Southside had petitioned to have new meters installed to keep parking spaces turning over near their offices. In January 1964 the council approved a two-month moratorium on ticketing for expired meters. Traffic engineers observed mixed results from the experiment. Less turnover of spaces meant that fewer people were using metered spaces, but the percentage of empty spaces did not change. Many visitors continued to feed the meters, unaware of the city policy. On March 25 the council voted unanimously to make the free Saturday afternoon parking policy permanent for all city meters.

In 1994 the Birmingham City Council doubled the fine for parking on an expired meter from $5 to $10.

In 1996 the city began replacing older, mechanical meters with electronic ones. The first 46 were installed on Short 20th Street near Birmingham City Hall. At the time, Birmingham had 5,075 parking meters.

From 1999 to 2001 (at least) City Action Partnership (CAP) guides added nickels to expiring parking meters in their patrol area for the holidays. In 2001 CAP began an "Out of Sight, Out of Crime" campaign by placing stickers on almost 3,000 parking meters reminding motorists to put valuables in their trunks.

In May 2008 most parking meter fees were doubled (excepting 15 minute meters) and fines for parking at expired meters were doubled from $15 to $30 (the latter provision was later repealed). Accordingly in fiscal year 2009 projected revenues from parking meters were set at $2.6 million, nearly double the actual collections of $1,304,003 reported for fiscal year 2008. $400,000 was earmarked in that budget for installing additional electronic parking meters. At the end of the year, actual collections amounted to about $1.2 million, in part due to widespread vandalism of meters.

In the 2010 Birmingham budget (prepared in 2009) the projected revenues from parking meters were returned to 2008 levels ($1.3 million). At the same time the city raised meter fees, doubling the 30-minute, 2-hour and 3-hour meters and increasing 10-hour meters from $2.00 to $2.50. The cost to replace meter mechanisms needed for the new fee schedule was estimated at $300 to $350 per meter, with the first ones installed on 19th Street, Short 20th Street, 22nd Street, and 5th Avenue North downtown. A metering kiosk was installed on a trial basis on Short 20th Street. Users paid and received a printed receipt to display in their windshield. Not long after the trial began the kiosks were removed and replaced with traditional meters.

In June 2014 the Alabama Department of Transportation notified the city that the hundreds of metered parking spaces located beneath the elevated I-20/59 road deck will, for safety reasons, have to be removed by August 25. Those spaces had been allowed under an agreement forged with the city in 1974 during planning for the BJCC.

The 2015 Birmingham budget (prepared in 2014) projected parking rates doubling again, with revenues projected to rise to $2.2 million. The ordinance establishing the revised rates would be introduced through the council's transportation committee. Councilor Kim Rafferty pledged to use $75,000 of her office's discretionary budget for public improvements to purchase new meters. The meters on Short 20th Street were once again used as a trial for new digital meters capable of accepting credit card payments.

A backlash of complaints about some meters charging $0.25 for just six minutes led Rafferty and the council to amend the fee schedule on November 18, 2014; preserving some increases, but preserving a minimum of 15 minutes of parking for each quarter dollar.

In April 2018 The Birmingham City Council's Transportation Committee heard a presentation from ParkMobile LLC, an Atlanta, Georgia-based private company that offers parking management services accessible via a smartphone app. Without replacing physical meters, patrons would be able pay parking fees and potentially to look for available parking spaces and reserve spaces by pre-paying. From July 2017 to June 2018 total revenues from parking meters was $753,000. In February 2020 the Council's Transportation Committee recommended that the full council approve a contract with ParkMobile and amend its parking ordinances accordingly.

As of November 18, 2014 fees for parking at metered spaces in Birmingham are as follows:

Users of the ParkMobile app are charged an additional $0.45 per transaction as a convenience and card processing fee. The city does not collect any portion of those fees.

In 2009 2,400 of the city's 6,000 parking meters were broken into or vandalized. One suspected looter was arrested and charged with possession of burglary tools. Nearly $10,000 in damages have been reported, and an unknown amount of money stolen. In February 2010 the city reported that 969 of meters remained inoperable.

In May 2010 Council member Johnathan Austin asked the mayor's office and the Birmingham Department of Traffic Engineering to discuss the matter with the Council's Public Safety Committee. Late that month the city made plans to spend $500,000 to replace the broken meters with sturdier models and to proceed with implementing the increase in parking fees passed by the council. The 2011 Birmingham budget projects $2 million in parking meter collections, compared to $919,500 collected in fiscal 2010.

On October 26, 2010 the City Council approved a bid from Duncan Parking Technologies of Milwaukee, Wisconsin to supply vandal resistant meters to replace existing broken ones. Nina's Way, the section of 20th Street North between Birmingham City Hall and Linn Park will be used as a test area for more modern multi-space metering. Installation of the new meters began on December 21.

Effective July 1, 2020 parking at the city's 3,945 downtown metered spaces can be reserved and/or paid for through the "ParkMobile" mobile app.