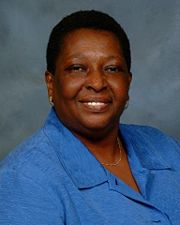 Phyllis F. Wyne (born January 2, 1949) is a three-term member of the Birmingham Board of Education representing District 9. She was elected president of the Board in a 5-4 vote on November 9, 2010.

Wyne attended Scott Elementary School and graduated from Western-Olin High School in 1967. She attended Jarvis Christian College in Hawkins, Texas, completed a bachelor of arts in business in 1971. She worked as an instructional design specialist at South Central Bell until February 1996, when she took early retirement after seventeen years. In 1999 she became director of programs and services for the Literacy Council of Alabama, serving until 2005. She has led Focus On Recovery, a non-profit organization which helps women overcome alcohol and drug addiction, since 2009.

Wyne also serves on the boards of the Jefferson County Center for Workforce Development and the Birmingham YMCA. She was a member of the 2004 class of Leadership Birmingham.