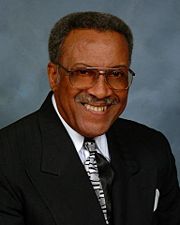 Maye earned a bachelor's degree in elementary education from Alabama A&M University in 1958. He returned to complete a master of education in school administration in 1971 and then completed a certification in school administration at UAB in 1975 while pursuing a doctorate. During his career he served as principal of Stonewall Jackson Elementary School in Arlington-West End.

After Sheila Tyson left her Birmingham City Council District 6 seat vacant to be sworn into the Jefferson County Commission in November 2018, he applied to be appointed by the Council to complete her term.