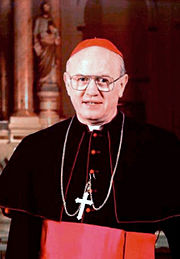 Raymond James Boland (born February 8, 1932, in Tipperary, Ireland) was the second Roman Catholic Bishop of the Catholic Diocese of Birmingham and the seventh Bishop of the Diocese of Kansas City-Saint Joseph.

Boland is the second of four sons born to John J. and Gertrude O'Brien Boland, who settled in Cork County shortly after his birth. He attended school there and graduated from Christian Brothers College and the National University of Ireland in Dublin. He continued his studies at All Hallows Missionary College in Drumcondra and was ordained in the Archdiocese of Washington on June 16, 1957 and spent the next 31 years there, pastoring in the parishes of St Hugh in Greenbelt, Maryland and St Michael and St Camillus in Silver Spring, Maryland.

For the archdiocese he served as assistant director of the youth department from 1960 to 1975, as secretary for Catholic education until 1981, and as delegate for communications, chancellor, moderator of the curia and Vicar General. He was named a Chaplain of His Holiness in 1973 and a Prelate of Honor in 1978. He served two terms as chair of the Archdiocesan Council of Priests and, as Archdiocesan Consultor, coordinated Pope John Paul II's October 1979 state visit to Washington D.C.

In 1984 Boland spent three months as pastor in residence at his alma mater, All Hallows College. He spent the time writing studies on the future of the Seminary.

Boland was appointed Bishop of Birmingham on February 2, 1988, and ordained on March 25 of that year. Significant events during his tenure included the building of the new campus for John Carroll Catholic High School and renovations to St Paul's Cathedral. He served on the boards of EWTN and the Notre Dame Graduate School of Theology in New Orleans, Louisiana. He and Archbishop Lipscomb of Mobile jointly issued a "Pastoral Letter on the Implications of Poverty in Alabama" and a "Provincial Statement on the Impact of Religious Fundamentalism." He was a member of the 1989 class of Leadership Birmingham.

Boland was appointed Bishop of Kansas City-Saint Joseph, on June 22, 1993. While there he supported the renovation of the Cathedral of the Immaculate Conception, the building of fourteen new churches, several parish halls and additions to a few schools, largely through the "Gift of Faith" capital campaign, the first in the diocese's history. He also guided the development of the "Millennium Study" of 1997 which formed a blueprint for diocesan programs. A "Bishop Boland Golf Tournament" was founded to raise money for Catholic Charities Adoption Programs.

Bishop Boland retired on May 24, 2005, and currently serves as Bishop Emeritus of the Diocese of Kansas City-Saint Joseph.