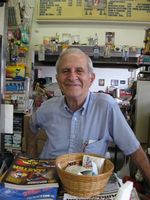 Josof served as a military policeman in France and Germany during World War II. He and his family moved to Birmingham after the war, where he married Louise Domit. Together they opened the Five Points Market, which became a fixture in the neighborhood.

Josof was a member of St Elias Maronite Church, the Knights of St Maron, and the Cedar's Phoenician Club. He died in 2011 following a long illness. He was survived by his wife, three children, and seven grandchildren.