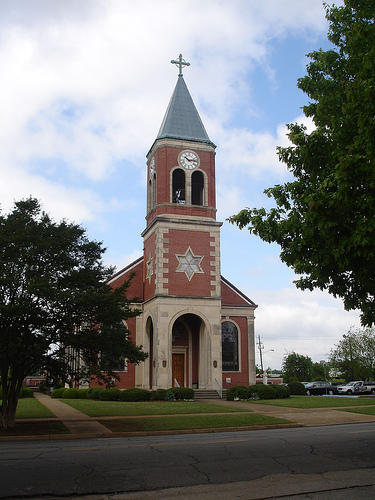 St Elias Maronite Church is a Maronite Rite (Antiochene Catholic) church, serving primarily the Lebanese-American community of Birmingham, and located at 836 8th Street South in the Glen Iris neighborhood. It is the only Maronite church in Alabama, and one of about 35 parishes in the Eparchy of Our Lady of Lebanon of Los Angeles. It is one of about 69 parishes that are part of the National Apostolate of Maronites (a lay organization).

The pastor is Chorbishop Richard Saad, assisted by deacon Joseph R. Stephens and sub-deacon Samuel Wehby. Liturgy is celebrated on Saturday evenings and Sunday mornings and daily at 8:00 AM. Confession is heard on Saturday afternoons or by appointment. The parish has more than 1,200 members.

The Maronite church is a distinct body within the Catholic church. Its head is the Patriarch of Antioch, the first of whom was St John Maron, elected AD 686. The Antiochene church developed its liturgy in the Syriac language (a form of Aramaic) and were swept up in a schism over the Eastern church's adherence to Monotheletism (The belief that Christ's will was purely divine, rather than both divine and human). This view was held to be heretical by the Roman church, and caused a schism in the 7th century, leading the Maronites to take refuge in Lebanon. The Maronites returned to the Catholic communion in the 12th century. The sect spread from Lebanon by emigration to Cyprus, Palestine, Egypt, and to South America and the United States during the late 19th and early 20th centuries.

By 1906 Father James Coyle at St Paul's Catholic Church was serving as a chaplain to the city's Maronite and Melkite communities, which numbered more than 150 at the time. Maronite missionary Mobarek Bellama came to Birmingham in 1907. Coyle petitioned Bishop E. P. Allen for a permanent Maronite priest, and Bellama returned in January 1910, sharing Coyle's rectory and leading the liturgy in Syriac in a classroom at St Paul's Catholic School while helping organize a new parish. 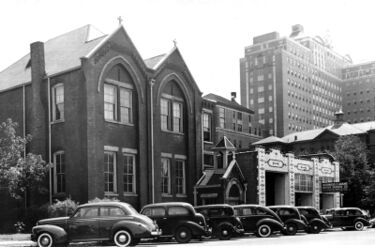 The St Elias parish was established in 1910. The community purchased and renovated a brick building on 6th Avenue South, between 20th and 21st Streets. Bellama served as the first pastor. Bishop Allen officially dedicated the church, which was named for St Elias (Elijah), "patron of the villages from which the faithful came," on February 14, 1914. It was the first Maronite parish church south of Philadelphia. By then the congregation numbered over 300. The first confirmation class was recognized in 1919.

Reverend George Aziz wrote out the regular liturgy phonetically to help non-Arabic readers to participate in services. The Great Depression caused the parish to struggle, dwindling to 61 communicants who were unable to support their own priest. The Diocese provided part-time priests who led services in the Latin rite. The church closed its doors in 1939, but work began quickly to re-establish it. Reverend Joseph Abi-Chedid took over the small fund raised by the Ladies' Altar Society and began repairs of the existing church and plans for expansion. Abi-Chedid traveled to Lebanon with Yousef Habshey and Sam Boackle in 1947 to purchase marble from Habshey's family quarry.

The present church site in Glen Iris was purchased by 1949 and the cornerstones, carved from the imported marble blocks, were laid. The design, commissioned from the firm of Pembleton and Mims, was altered greatly before construction. The completed church consists of a brick gabled nave with a central tower over the entry. The tower features a large six-pointed star window over the entry, surmounted by a bellchamber with a clock, and a steep pyramidal roof topped with a cross. The interior is divided into nave and altar by a raised bema (platform). The altar area is a semicircular apse. 19 arched stained glass windows surround the nave and altar. The first liturgy was celebrated in the new building at midnight on Christmas morning, 1950.

The adjoining Church Hall was completed in 1958. Both buildings were rededicated during the parish's "Golden Jubilee" in 1960 by Paul Peter Meouchi, Maronite Patriarch of Antioch and all the East. A new Rectory was completed in 1962.

In June 1972 St Elias hosted the 9th National Apostolate of Maronites Convention, which was attended by Archbishop Nasrallah Peter Sfeir as representative of Pope Paul VI. The church again hosted the NAM Convention in 1993 and 2010. Bishop Robert Shaheen attended the latter convention, which celebrated the parish's centennial.

A new multipurpose building was added to the north side of the church in 1996. In 2009 the church interior was renovated with the addition of a covered side entrance designed by Carraway & Associates and built by Boohaker & Associates. A columbarium and grotto was also constructed that year, followed by new landscaping and pavers in front of the church and rectory in 2010. The church hall's kitchen was renovated and expanded in 2014. Maronite Patriarch Bechara Cardinal Peter Rai visited St Elias in September of that year.

The vestibule windows depict St Maron, the father of the Maronite Church in Syria and St John Maron, the first Patriarch, both facing toward the front of the church. On the sides are St Mary, depicted crowned as Queen of the Universe, and her mother, St Anne, patroness of mothers and children.

In the nave are windows depicting the Apostle Philip, St Anthony of Padua, St Theresa of Lisieux, Our Lady of Fatima, St Joseph, and Jesus the Good Shepherd. Smaller windows depict the Sacred Heart of Jesus and Immaculate Heart of Mary.

Windows around the altar depict Saints Peter and Paul, The Agony in the Garden and Crucifixion, The Annunciation and the Archangel Michael, and in the center, St Elias, prophet and patron of the parish. His motto, "Zelo Zelatus sum pro Domino Deo exercituum" (I have been most zealous for the Lord, the God of Hosts) is inscribed in a shield at the top of the window.

Since 1999 St Elias Maronite Church has hosted an annual Lebenese Food and Cultural Festival at the church.

The 2007 Food and Cultural Festival was held on April 13-14 with a full menu of Lebanese foods and sweets available a la carte and as platters. A display of historical and Lebanese artifacts was placed on exhibit to supplement tours of the church and its stained glass windows. Demonstrations of traditional dances were made inside while Lebanese bands entertained in a tent outdoors. Various imported Lebanese and religious articles were offered for sale and at silent auction.