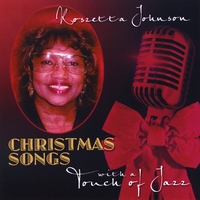 Cover of the CD, "Christmas Songs With A Touch Of Jazz," by Roszetta Johnson

Johnson, the daughter of Annie Standford, began singing in a church choir and with the Violet Harmonettes. She moved to Birmingham, and later to McIntosh after her parents separated, graduating from Union High School. She returned to Birmingham and emerged as a soul singer in the 1960s with a regular gig at the 401 Club.

From there she was hired as a featured singer at the A. G. Gaston Lounge and Supper Club. Soon she was recording tracks written and produced by Sam Dees on Jesse Lewis' and Clinton Moon's Clintone Records. The first of those, "A Woman's Way" (1970), made it onto the national pop charts and hit #28 on the R&B chart. She went on to tour with Bill Doggett and to stand in for Candi Staton. She was honored as a "Great Alabama Star" by Governor George Wallace in 1972.

Johnson earned her bachelor of arts at UAB and taught at Ramsay High School for 25 years.

In 1982 she was inducted into the Alabama Jazz Hall of Fame. Soon later she returned to primarily performing gospel songs, including regular appearances on the Country Boy Eddie Show. She joined the Shades Mountain Baptist Church choir and has toured toured Japan, Ireland, and England with praise teams. She was awarded the 2007 BAMA Award for "Best Female Vocalist."

Scovil died in March 2011. She was survived by her four children: Joey, Patrice, LaQuita and Demetrice; five grandchildren and several great-grandchildren.