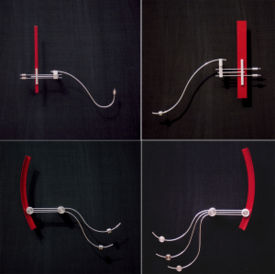 Royal Miree is an artist, specializing in kinetic sculpture.

Miree is the son of a general contractor, and spent much of his childhood walking construction sites or with my mother at the Birmingham Zoo, never missing a National Geographic, Nova, or Wild Kingdom special on television. He also enjoyed building and taking things apart to find out how they worked.

At fifteen he began an apprenticeship to kinetic sculptor Edward Hendricks and found an entirely different side of art not bounded by the margins of a static canvas, but an art that utilizes every piece of itself to be realized.

At 19, Miree left Birmingham to study architecture, and began working in a studio in New York, exploring different media and subjects. Studies of form and movement progressed through toward minimalism of expression and economy of means. His maturing work aimed to create a fluid, figurative image using the minimal amount of material -- softening hard materials through graceful movements, always refining the visual affect the work creates while in motion.

Creation of a kinetic sculpture