The park is crossed by 14 miles of hiking trails, highlighted by scenic overlooks, an abandoned limestone quarry and the surface ruins from an old iron ore mine. Frequent special events and guided hikes are scheduled year-round. The park hosts spring break and summer day camps. 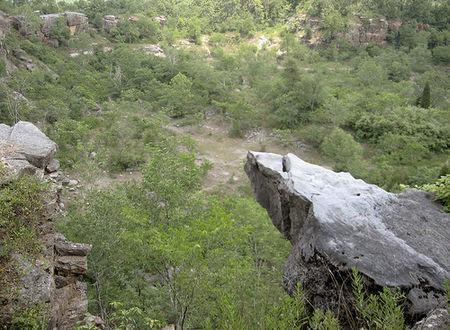 The Ruffner Mountain Nature Coalition was established on July 19, 1977 for the purpose of conserving a 24-acre site on the north side of Ruffner Mountain in South East Lake for environmental and cultural education and recreation. An additional 4-acre residential lot was loaned to the city by George and Bernice Shepherd. Kathy Spencer, head of the Coalition, helped turn the small red-painted cottage on it into an administrative office with space for nature programs.

In 1982 the San Francisco, California-based Trust for Public Land obtained an option to purchase four 120-acre parcels on Ruffner Mountain, marking the group's first conservation purchase in Alabama. The Alabama Environmental Council took on the development of the nature preserve as one of its earliest projects.

Since 1997 the preserve has expanded with parcels obtained through funds donated to the RMNC, grants from the City of Birmingham, and land acquired through Alabama's Forever Wild Land Trust, the Trust for Public Land, Jefferson County Greenways, and donations from United Land (a division of Walter Industries, which owned the bulk of the land on the mountain). During the early 2000s, the City provided over $200,000 in annual operations funding to Ruffner Mountain Nature Center.

A $600,000 project completed in 2008 added a wetlands environment to the park's educational landscapes. A series of small pools stocked with native grasses and wetlands plants are fed from an artesian well near the Irondale side of the park. Graveled paths and wood bridges form a handicapped-accessible trail around the wetland.

In March 2010 the 6000-square foot "Tree Top Nature Center" was constructed near the East Lake end of the park. The $4.5 million project was designed by KPS Group and built by the Stewart Perry Company. The building was awarded a "gold" certification under the U. S. Green Building Council's "LEED" program. The structure incorporates recycled materials and computer-controlled lighting. It is raised on stilts and catches rainwater from its roof for re-use. Stone Leaf Design of Montgomery planned the center's exhibits. 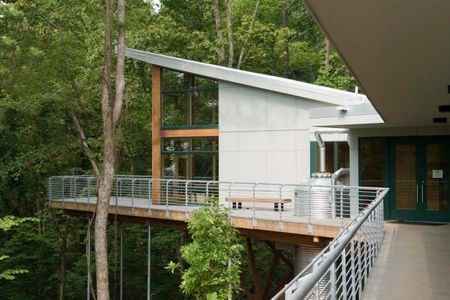 Other projects in the center's master plan include acquisition of up to 500 additional acres of property on the northeast edge of the park, construction of a playground area, possible structural restoration of the Wharton Lookout Tower as an observation platform, and new entranceways.

Fund-raising for the continued realization of Ruffner Mountain Park's master plan was coordinated in a "parknership" with the campaigns to create Red Mountain Park and the Railroad Reservation Park. Together, the three parks would give residents of Birmingham more public green space than in any other American city.

In its 2011 and 2012 budgets, the city of Birmingham ceased providing operating funds to Ruffner Mountain Nature Preserve, despite a contractual agreement for the organization to manage the resource through 2029. Operational funds were restored in the 2013 Birmingham budget, but were again omitted for 2014.