This article is about the blues musician. For others with similar names, see Sam Frazier. 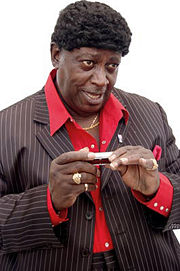 Frazier was one of six siblings born to TCI coal miner Sam Frazier and his wife, Terretta in the mining town of Edgewater in western Jefferson County. His mother earned extra money for the family by hosting Friday night barbecues and operating a shot house from the family's small home. Itinerant musicians often entertained at the weekend barbecues, including legendary bluesmen Sonny Boy Williamson and Jimmy Reed.

According to Frazier, it was Williamson who presented him with his first harmonica, and a few brief lessons in playing blues music. After finishing 9th grade at Edgewater Elementary School, Frazier went to Westfield High School. At 17, he moved in with his uncle, Willie Perry on a farm near the Marengo County seat of Linden. He completed high school at Linden Academy while working on the farm and part time at a local restaurant.

Through a co-worker at the restaurant, Frazier hooked up with a blues band and moved back to Birmingham. He soon shed the group and began taking bookings as a one-man act, accompanying himself on guitar, harmonica and a two-piece drum kit. His sister joined him as a bassist and their act caught the ear of local DJ Maurice "The Thin Man" King. He arranged an audition with a talent agent, who took the Fraziers to New York City to record a single entitled "You Got Me Uptight", which was moderately successful on radio. The Fraziers performed in New York at the Sonia Ballroom for a while, before Sam moved back to Birmingham and joined the gospel quartet the Golden Hummingbirds.

Frazier also led a three-piece combo which often played American Legion halls and Disabled Veterans functions. He took a day job at a local auto dealership, and through his connections there, earned an audition for "Country Boy" Eddie Burns. Burns added him to his touring group which played store openings and other regional events. He also encouraged Frazier to follow Charley Pride into performing country music. He became a regular guest on the Country Boy Eddie Show on WBRC. After winning a talent contest at Sonny Duke's Night Club, Frazier accepted a regular booking there, which lasted for five years.

Joe Mitchell of Missile Records heard Frazier at the club, and signed him on to record twelve songs in Nashville. The single "Cabbage Man" was the most successful single of the session. In 1970 Frazier recorded another group of songs on Neal Hemphill's Birmingham-based Goodie Train label. He returned to Nashville in 1974 to audition for the syndicated television program "You Can Be a Star". He won the first round of competition with his performance of "An Old Chunk of Coal", but did not advance beyond the second episode.

While in Nashville, Frazier performed at "Fan Fare" and, after being spotted by another talent agent, was hired to sing at Gilley's Supper Club in Pasadena, Texas. He returned to Birmingham in 1987 and recorded a session of blues tracks at Hemphill's Sound of Birmingham studio with producer Don Mosley. The resulting album was distributed by Torrence, California's Blue Rock Records. Frazier moved to California to support the album, and also performed with the Johnny Otis Revue.

On a return visit to Birmingham, Frazier met Fred Sollie of Pensacola, Florida's Sollie Sunshine label and signed a two-year contract. He and Sollie collaborated on eight songs, including "Forty Acres of Hillside Mountain Land", which reached number 1 on the independent records charts in 1991. Another single, "Momma Kept the Lamp Light Burning" was picked up on international radio playlists.

During the 2000s, Frazier performed in Las Vegas, Nevada with tribute artist Gilbert Gauthier. He returned to Birmingham in 2006 to be with family. He worked with Mosley and Les Alexander at Sound of Birmingham for a CD, Long Lonesome Blues, issued on Transmedia Music in 2012.