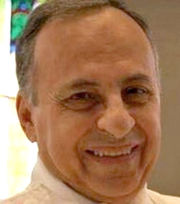 Wehby was the son of Salim and Maheba Wehby. The family emigrated to Birmingham before 1950. He served in the U.S. Army Reserves and spent a total of 18 years in college. He earned his real estate license in 1976 and founded All South Properties in 1982.

Wehby married the former Delores Bostany in 1978 and had five children. He was ordained as a Sub-Deacon at St Elias on December 4, 1994 and as a Deacon on September 18, 2007.

Wehby died in 2015 and is buried at Elmwood Cemetery.