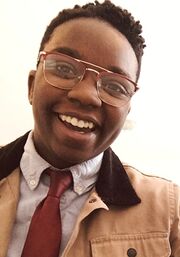 Shanté was adopted at age 8 and attended Glenn Hills High School in Augusta, graduating in 2012. She attended Savannah State University pursuing a criminal justice major before moving to Tuskegee in 2014.

Wolfe became involved with the Alabama Alliance for Healthy Youth in Montgomery and Birmingham, lobbying for comprehensive sex education in school curricula. On February 9, 2015 Shanté and Tori Sisson became the first same-sex couple to be legally married in Alabama, appearing at the Montgomery County courthouse immediately following a federal court ruling that required the state to recognize such marriages. Their legal ceremony followed a year after their spiritual wedding. The couple separated in 2018.

Wolfe was hired as an LGBTQ Rights and Special Litigation paralegal at the Southern Poverty Law Center in 2016. During the 2016 election she volunteered with the NAACP in Jackson, Mississippi. Later she founded BLK Pearl, an organization which secures safe learning and leisure environments for LGBTQ women of color, and which sponsored the 2017 and 2019 Women's Marches. In 2018 and 2019 she was employed as campaign manager for Planned Parenthood Southeast Advocates.

Wolfe was also one of the founders of the Birmingham Committee for Truth and Reconciliation which organized a public event for Angela Davis at Boutwell Auditorium in February 2019 after the Birmingham Civil Rights Institute's board of directors rescinded her Fred Shuttlesworth Human Rights Award. In 2020–2021 Wolfe was a deputy campaign manager for Charles Booker's U.S. Senate bids from Kentucky.

Wolfe joined the Washington D.C.-based Sunrise Movement, a group advocating for political action on climate change, and has held several positions relating to strategy. Since June 2021 she has also served as national political and social campaigns strategist for the New York City-based advocacy group Caring Across Generations.

As DJ BLK Alchemy, Wolfe has provided music for social justice events, including the celebratory gathering when Roy Moore was suspended from the Alabama State Supreme Court by the Alabama Court of the Judiciary in September 2016, for 2017 Women's March in Birmingham, and for the 2018 Birmingham Black Pride Party.