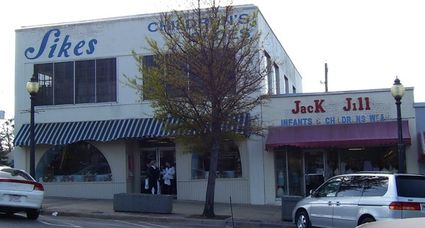 Sikes Children's Shoes and Jack N' Jill Shop is a retailer of children's shoes and clothing owned by Laura Player and located at 2719 19th Place South in downtown Homewood.

The store got its start when Fred Sikes opened the first Sikes Children's Shoes store in the Stevens Building at 2918–2920 18th Street South in Homewood on February 14, 1955.

When Frank Youngs Jr married Sikes' daughter in 1963, Sikes promised Young his own store within five years. In 1968 that promise became a reality with the opening of Sikes & Youngs Shoe Company in Vestavia Hills. A few years later, Youngs removed his name from the store's sign because Sikes was the name that had built recognition and a good reputation. Youngs ultimately divorced Sikes' daughter, but he had already bought the business from his brother-in-law, Wayne Sikes, in 1991.

In 1993, Youngs closed the Vestavia location but opened another Sikes Children's Shoes in the Riverchase Promenade across U.S. Highway 31 from the Galleria. Although the Hoover store did well, Youngs eventually went to a month-to-month lease as he got older to avoid a long-term one. In 2006, he was asked by Riverchase Promenade management to close so the center space of the shopping center could be reconfigured for Kirkland's, which was moving out of the Galleria. Therefore, the Hoover store closed on December 26, 2006. The three Hoover employees were transferred to the Homewood store.

In 2014 Laura Player, a long-time employee of the store, purchased both Sikes and Jack n’ Jill from Frank Youngs. The two shops operated as one, joined by an interior passage. When her 20-year lease in the deteriorating Stevens Building expired in December 2020, Player decided to relocate to a new building on the site of the former Bob Whitley Decorating building on 19th Place South. The new location offers more parking and floor space, as well as larger accessible restrooms furnished with changing tables.

The store operated from temporary quarters at 2707 Mamie L. Foster Place until the new building was completed in Spring 2021.