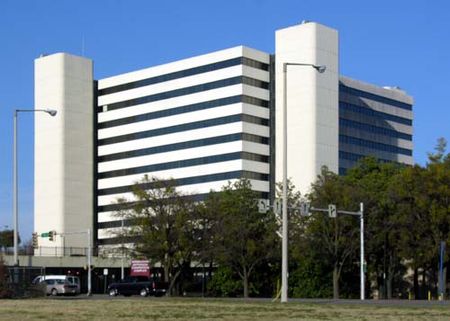 The Patriot Center (formerly the Social Security Administration Southeast Program Service Center) is an 11-story office building that was constructed for the United States Social Security Administration's regional payment center on the north side of 11th Avenue North between 19th Street North and 21st Street North. Developed by Chattanooga, Tennessee developer Franklin Haney, it was designed by John H. Summer and Associates of Atlanta and built by Martin and Nettrour of Atlanta and Pittsburgh.

The site was cleared as part of a nationwide program of "urban renewal". The 600,000 square-foot building is surrounded by a 2000-car covered parking garage at ground level. When the Civic Center was opened on the adjacent site to the south, the garage was made available for public parking during night-time and weekend events.

In reviewing the architectural design of the structure, critic Philip Morris complained that it showed no regard for the potential for establishing a connection to the BJCC and downtown Birmingham, instead making the south facade the "back" of the office tower with service areas and a fluorescent-lit parking garage stretching across the north edge of the civic center.

In 1985 Haney proposed to purchase the building as part of a deal in which he would develop a pair of high-rise luxury apartment towers above its parking deck. A sale was concluded in early 1991 for $7.2 million. Those proceeds were used, rather than bond funds, to pay for construction of the Birmingham Civil Rights Institute.

In 2008, Haney, who contributed heavily to political campaigns for city and state offices, secured a 40-year agreement for about half of the building to be leased by offices of the State of Alabama. He also proposed that the City of Birmingham and the Birmingham Board of Education lease the remainder of the building for about $5 million a year. In exchange, he would renovate the building to add a 1,000-seat conference center and new entrance lobbies. As part of that agreement, he also proposed building a luxury hotel either at the site of the current Birmingham Board of Education building on Linn Park or near the BJCC. Former Mayor Richard Arrington lobbied the city on behalf of the proposal, which also had the support of then-Mayor Larry Langford, but no progress was made.

In 2010 outgoing Governor Bob Riley signed a 30-year lease which consolidated the offices of the Jefferson County Department of Human Resources into 290,000 square feet of the building at a rate set to increase from $1.8 million to nearly $5 million per year after the first four years. In 2013 Mayor William Bell proposed consolidating the city's public safety headquarters offices into the building, paying about $139 million over 30 years in rent to Haney. Birmingham News columnist John Archibald published a series of articles exposing the contributions made by Haney through political action committees to the Mayor and a majority of the Birmingham City Council, which cast a shadow over the proposed deal.

In a follow-up interview, Haney disputed a number of previously-reported figures. He claimed that he had owned the property continuously since the 1970s, and spent $7 million buying the city's stake in a long-term lease in 1991. He also claimed that his proposal to the city in 2013 was to sell five floors to the city for $40 million for its public safety headquarters, for which most renovations were already complete, but another $10 million would likely be needed.

The proposal to lease the building for a public safety center was introduced again by Mayor Bell in 2016.