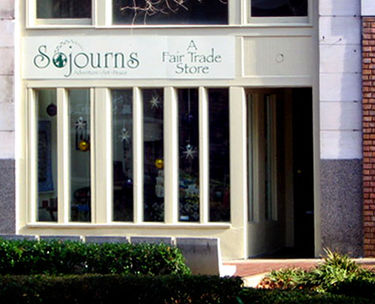 The store's slogan "Adventure-Art-Peace" is derived from the "five qualities of civilization" described by English mathematician and philosopher Alfred North Whitehead. The store supports projects that improve education and environmental protection. Sojourns is the first 100% Fair Trade store in Alabama. In addition to regular hours, it hosts special events in concert with the Birmingham International Festival and the Foundation for Sustainable Travel.

Melissa Kendrick first opened Sojourns as the state's first 100% Fair Trade store on October 25, 2005, in a 600 square-foot space in the Atrium Center at 1910 3rd Avenue North. It moved to a new, larger, location at 217 20th Street North on November 6, 2007. On September 1, 2010, Sojourns relocated to the Eubank Mercantile Building at 2017 3rd Avenue North, where it remained for a decade as part of the upstart downtown Birmingham retail community.

Rising rents led Kendrick to move the business to the Crestwood Shopping Center in October 2020.