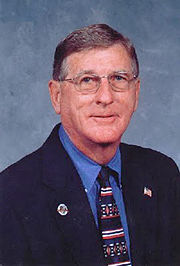 Penhale was the son of John William and Mary Lou Penhale, and the grandson of Charles Hinds, the first Mayor elected after the city was reincorporated in 1917. He attended Helena School and Thompson High School, then enlisted in the U. S. Army for service during the Korean War. He was stationed at Fort Mead, Maryland and Camp Picket, Virginia. Afterward he took a job at American Cast Iron Pipe Co. in Birmingham.

Penhale served on the Helena City Council in 1960 and ran unsuccessfully for Mayor in 1964. He was elected in 1968 and served 11 terms. Among his accomplishments as mayor are overseeing the development of a municipal sewer system, the dedication of public parks, and the construction of the current Helena Municipal Building on Shelby County Highway 52. Later he focused on promoting Old Town Helena and other public improvements.

Penhale was defeated by former police chief Mark Hall in a runoff in the 2012 mayoral election. More voters turned out in the runoff than in the general election, strongly voicing support for a change in leadership.