Stephannie Sigler Huey (born 1955) is a Birmingham City Schools math teacher and pastor of God’s Holy Tabernacle Church. She moved home to Birmingham from Denver, Colorado where she worked as a mortgage broker and pastored another church of the same name. While there she ran unsuccessfully to challenge Wellington Webb's mayoral re-election.

Huey grew up in Birmingham. She graduated from Parker High School in 1973 and went on to earn a bachelor's degree in business administration at Miles College in 1978. She has worked as a mortgage loan officer at Security Title in Denver and as an assistant manager at The Associates Financial Services. She owns Trinity Mortgage Company. She returned to Miles to complete a bachelor's in 2000 and then earned a master's in math education at Alabama State University in 2004. In 2009 she completed her doctorate in Christian education at the Andersonville Theological Seminary in Camilla, Georgia. 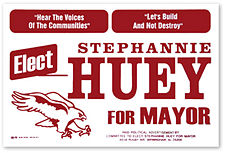 In 2003 Huey was pursuing a master's in math at Alabama State University. She finished 14th of 18 candidates in the 2003 Birmingham mayoral election on a platform of improved mass transit and landing an NBA team. She qualified in the 2009 special election to fill the vacancy left by Larry Langford. If elected, she planned to bring city department heads into brainstorming sessions to eliminate problems and complete projects such as the domed stadium and light rail. Huey finished 9th of 14 candidates with 60 of the 34,931 votes cast.

Huey ran again in the 2013 Birmingham mayoral election, on a platform of education reform, improvements to mass transit and overall economic development. She claims to have specific plans to promote entrepreneurship, but did not wish to disclose them prior to the election. She is in favor of recruiting professional sports teams to attract young people to the city. She also opposes the hiring of Craig Witherspoon as superintendent of Birmingham City Schools and blames him for allowing state takeover of the system.