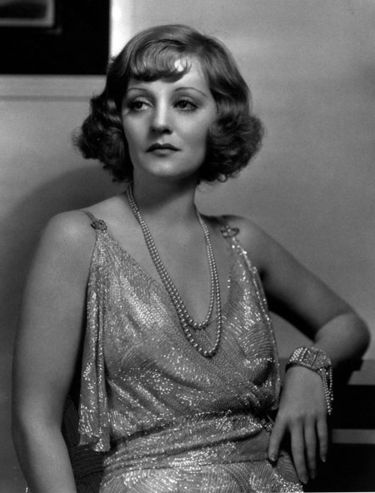 Bankhead was the second daughter born to Huntsville city attorney and future U. S. House Speaker William Bankhead and his wife, Adelaide, who died of blood poisoning a few weeks afterward. She was named for her grandmother, the former Tallulah Brockman, wife of congressman John Bankhead. Following her mother's funeral, the infant Tallulah was christened at Huntsville's Episcopal Church of the Nativity.

Tallulah and her older sister Eugenia were raised in Jasper and Montgomery, and also spent a great deal of time in Washington D. C. as they got older. Tallulah spent much of her childhood in the care of her grandparents, or her aunt and uncle, Thomas and Marie Bankhead Owen. Her father remarried in 1914, adding a stepmother, Florence McGuire Bankhead to the roster of caregivers.

Between the relative glamor of national politics and the inconsistency of her schooling, Tallulah spent her school days dreaming of appearing on the silver screen. As a child she performed at a party attended by Orville and Wilbur Wright in Montgomery, winning them over with an impression of her kindergarten teacher. At age 15 she entered a contest sponsored by Picture Play magazine to win a screen test. Chaperoned by her aunt Louise Lund, she made the trip to New York and won bit parts in six silent films and minor roles on Broadway. She continued to audition, and entered the periphery of the Algonquin Round Table as her reputation as a sharp-tongued girl-about-town grew. She made her London state debut in "The Rope Dancers" in 1923. Her most memorable part came in 1926 when she portrayed the waitress, Amy, in Sidney Howard's Pulitzer-winning "They Knew What They Wanted".

During her time in Europe, Bankhead became recognized for her outré behavior in public. In addition to risqué costume, public love affairs and a notorious wit, she famously shouted obscenities at Nazi party members attending the June 22, 1938 Max Schmeling/Joe Louis match. She returned to the United States in 1931 and signed with Paramount Pictures, working at their New York studios before moving to Hollywood, California. She contracted venereal disease and underwent a hysterectomy in 1933, nearly dying from complications. In 1934 she returned to the stage and, in 1937, married fellow actor John Emery at her grandmother's estate, Sunset, in Jasper, followed by an extravagant party in the Continental Room at the Tutwiler Hotel. They toured as co-stars of an unsuccessful run of "Antony and Cleopatra" before divorcing in 1941.

Bankhead found success as Regina Giddings in Lillian Hellman's "The Little Foxes" in 1939, winning the Best Performance award from the New York Drama Critics and earning a spot on the cover of LIFE magazine. The production toured the United States in 1940. In 1942 she won a second Drama Critics award for her portrayal of Sabina in Thornton Wilder's "The Skin of Our Teeth", but also began a long-running feud with the show's director, Elia Kazan.

Bankhead's turn as journalist Constance Porter in Alfred Hitchcock's feature film Lifeboat in 1944 earned her a Best Actress award from the New York Film Critics Circle. Though the film received multiple Academy Award nominations, she was ineligible for an Oscar because she was no longer under contract to a Hollywood studio. After World War II she returned to Broadway, with a long-running and high-paying role in a revival of Noel Coward's "Private Lives", which toured the United States in 1949 and 1950. Bankhead publicly supported the presidential campaign of Harry Truman in the 1948 election, famously belittling his Republican opponent Thomas Dewey. She sat with the President's family at the inauguration ceremony, and booed South Carolina governor Strom Thurmond, the Dixiecrat candidate, as his float passed by the reviewing stand.

Beginning that year, Bankhead began emceeing "The Big Show" Sunday night variety program on the NBC Radio Network. When the program ended in 1952 she made the rounds of TV variety shows as a featured guest. She also penned an autobiography, which ranked on the New York Times bestsellers list for 26 weeks on the way to selling 10 million copies. She also contributed articles to magazines such as Ebony, in which she bemoaned the slow erosion of racial prejudices. She maintained her celebrity with talk show appearances, stage roles and guest appearances on series television.

Bankhead's final stage role was in Tennessee Williams' "The Milk Train Doesn't Stop Here Any More" in 1963. She ended her film career with a part in Hammer Films' "Fanatic" in 1965 (released in the United States as Die! Die! My Darling!). Her final television performances included a recurring role as "The Black Widow" on the 1960s ABC series "Batman" and a one-time appearance on the "Smothers Brothers Comedy Hour", both in 1967.

Bankhead died at St Luke's Hospital in New York City of pneumonia and emphysema in December 1968. She is buried near her sister, Eugenia, in St Paul's Churchyard in Chestertown, Maryland.

Actress Betty Lou Gerson based her vocal performance as "Cruella De Vil" in Walt Disney's 1961 film One Hundred and One Dalmations on Bankhead.