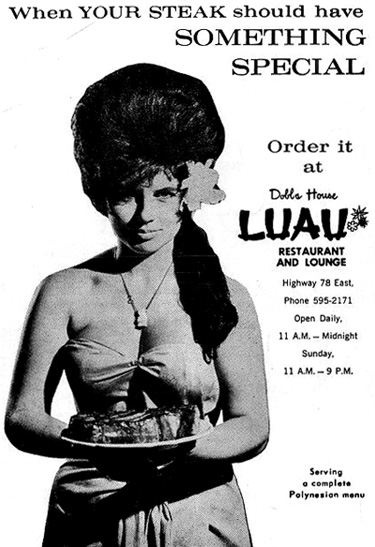 Dobbs House Luau Restaurant and Lounge was a Polynesian-themed restaurant that operated during the 1960s on Crestwood Boulevard just west of the Holiday Inn. The restaurant concept had debuted in Atlanta under the Dinkler Hotels banner before it was bought by the Tennessee-based Dobbs House and replicated in other Southern cities.

The restaurant was set back from the highway, with a grassy lawn out front decorated with a cascading fountain lit by a large gas torch. The waitresses at the Luau wore grass skirts, over form-fitting muumuus in winter and over one or two-piece swimsuits in the summer. Specialty dishes included "Celestial Chicken" and the "Flaming Kona" dessert, served in a conch shell with a rum-based sauce, en flambe.

Notable guests at the Luau included the Harlem Globetrotters and actor Richard Kiel.