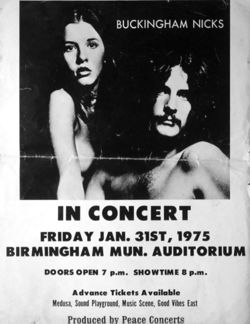 Buckingham Nicks was a California-based music duo made up of guitarist Lindsey Buckingham and vocalist Stevie Nicks. Their sole 1973 album earned little airplay, except on Birmingham's WJLN-FM, which aired "progressive/underground rock" in the evening hours.

The duo played three times in Birmingham. They opened for Mountain and Poco on their first two visits and cultivated a secure fan base in the area. Meanwhile, Keith Olsen, owner of Sound City studio in Los Angeles, played "Frozen Love" to Mick Fleetwood of Fleetwood Mac to demonstrate the qualities of the recording studio. When Bob Welch left the band, Fleetwood inquired about bringing Buckingham on board as his replacement. Buckingham refused to leave Nicks behind, and they accepted the invitation on December 31, 1974. In an interview, Nicks said of accepting Fleetwood's offer: "We could join Fleetwood Mac or we could move to Birmingham, Alabama."

Just days later, Birmingham promoters contacted Buckingham Nicks' agent and invited the pair back to Alabama to headline shows at the Fairgrounds grandstand on January 28, Tuscaloosa on January 29, and at Municipal Auditorium on January 31. Buckingham recalled that "We went to Birmingham and discovered we'd sold out an auditorium. Just blew our minds because we were totally unknown in L.A., couldn't get a gig at a club or anywhere, and here were six thousand people out there going nuts!." He told Rolling Stone that the shows allowed the band, with Gary "Hoppy" Hodges on drums and Tom Moncrieff on bass, to go out "in style".

Buckingham's 1979 composition, "Tusk" (ostensibly shorthand for "Tuscaloosa") was recorded in Dodger Stadium with the University of Southern California's marching band. It is performed by the University of Alabama's Million Dollar Band at Alabama Crimson Tide football games in Bryant-Denny Stadium.

The Buckingham Nicks album was aired in its entirety as one of the first Wednesday night full-album features on WZRR-FM "Rock 99" in 1989.