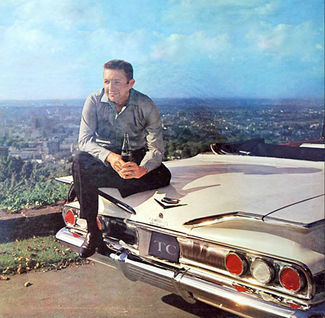 Charles, the son of Charlie and Pearl Clements Epperson of Chattanooga, left his hometown to pursue a career as a big band crooner and found work with the Horace Heidt Orchestra, but the era was on the wane and he transitioned to solo singing, at first on the CBS Radio Network and then under contract to Decca Records in Nashville, Tennessee. His single "Our Love Affair" was a regional hit and served as the centerpiece of his debut album. He appeared in the American International Pictures feature "Shake, Rattle & Rock" performing "Sweet Love on My Mind" and "Rockin' on Saturday Night". He began to tour in the Southeast, including a long residency at Mike's South Pacific night club in Homewood in 1956.

That July Charles began performing for "open house for teenagers" on Wednesday afternoons at the night club. The event was publicized on WSGN-AM which had recently switched to a pop music format and begun broadcasting from a "Sky Castle" booth at Eli's Drive-In in Lakeview. As a promotion, WSGN held a contest for a "date with Tommy Charles" which would include a follow-up phone call from the set of the Hollywood movie he was expected to appear in later that year.

After the movie deal fell through, Ben McKinnon recruited Charles to return to Birmingham as and overnight disc jockey at WSGN. He began his tenure on the evening of December 18, 1956. After an initial moment of hesitation, the newly-minted announcer found his stride and his teenaged audience with his "Road Runner Show", broadcast from the lobby of the Alabama Theatre. Later he was moved to the 7:00 to midnight slot and headed the Sky Castle Serenade program from the "Sky Castle" studio at its second location behind the Hickory Hut in Five Points West. He was voted "Best DJ of the Year" by the Birmingham Advertising Club for three straight years from 1957 to 1959.

Charles first worked with Doug Layton at WSGN. The two both left for rival WYDE in 1957. Charles then left Birmingham briefly in 1961 to rejoin McKinnon at KTHT-AM in Houston, Texas. He was replaced at WYDE by Dave Roddy. When Charles returned in 1962 he was paired with Layton on the 3:00-7:00 afternoon slot. "Layton & Charles" pioneered the two-man format in Birmingham and drew a devoted following with their banter and skits. They also hosted dances at area ballrooms such as the Hollywood Country Club.

In 1964 Charles helped auto dealer Tom Gloor start up the new WAQY AM 1220, a daytime-only station that played more sedate top-40 hits than WSGN and WVOK. He recruited Layton, and theirs became the first two-man morning show in the Birmingham market. They continued using characters they had developed at WYDE, including "Buddy Birmingham", "Sir Rodney Featherstone" and "Jud and Clara Harrington".

After John Lennon claimed in 1966 that the Beatles were "bigger than Jesus", WAQY led a group of grandstanding stations that refused to play Beatles songs over the air in Birmingham. Charles urged listeners to bring their records and paraphernalia to the studio to be destroyed in a tree shredder. WAQY's "Ban the Beatles" crusade was the first to gain nationwide attention and is referenced in numerous Beatles documentaries.

Charles was also an accomplished community stage actor, notably with the Center Players. He was also interested in hot rods and opened Tommy Charles Imported Cars, specializing in Triumphs in 1967.

By 1968 WAQY was playing less and less music and featuring talk shows, mainly aimed toward female listeners. The next year they went back to Top-40, but without success. Charles sold the station in 1969 and it went off the air in 1970. In 1974 Charles joined the low-rated WBMG-TV news team as sports anchor.

In 1975, Charles was back at WSGN, co-hosting a morning show with newcomer John Ed Willoughby. As half of the radio team T. C. and John Ed. They moved to WQUS-FM in 1984 and then to WERC-AM the following year, where they flourished for another decade before Charles' death. The show originally featured music alongside the hosts' banter, but evolved into a full-time talk show with call-in guests. During the 1982 ice storm T.C. and John Ed helped coordinate efforts to help those stranded without heat and won a "Lotus Award" from the Alabama Broadcasters Association. Charles hiked up Red Mountain during the Blizzard of 1993 to be in a position to coordinate assistance again.

Charles died in 1996 from complications from open-heart surgery.