This article is about the former WSGN broadcast booth. For the restaurant inspired by it, see Sky Castle Gastro Lounge‎. 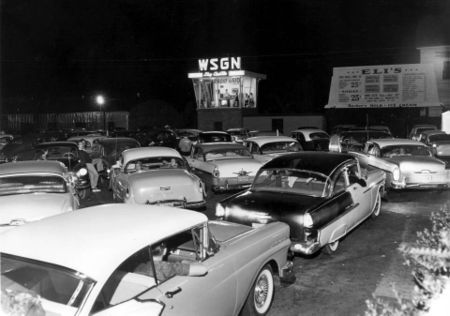 The Sky Castle was a two-story, glassed-in, drive-up broadcast booth used by WSGN-AM in the mid-to-late 1950s. WSGN moved its studios to the Southern Life & Health Insurance building at 2318 7th Avenue South and adopted a Top 40 format in 1955.

The Sky Castle was originally located behind Eli's Drive-In at 2830 7th Avenue South. It consisted of a glass-walled booth perched over a concrete block base. A telephone handset mounted to the outer wall allowed teens to make requests directly. Loudspeakers mounted outside the booth allowed those in the area to hear the broadcast without tuning in. In July 1956 complaints from neighbors about the sound from the outside speakers forced the booth to shut down while changes to the wiring were made. At the time police arrived, host Dick Bennick was interviewing Tommy Charles, then a nightclub singer performing an extended residency at Mike's South Pacific in Homewood.

The restaurant's name was expanded to "Eli's Sky Castle Drive-In" to reinforce the brand. Eli Coirie sold the business to Ed Salem in 1958 and the Sky Castle continued to operate from the parking lot of what then became Ed Salem's No. 3 Drive-In.

Salem was not as supportive of the effect of the studio on his business, as his lot was continuously filled up with young people just parking and listening to the radio from their cars instead of ordering food. The station agreed to relocate, and built a second "Sky Castle" atop the Hickory Hut Bar-B-Que at Five Points West Shopping Center. The promotion was ended in the late 1950s or early 1960s.

The Sky Castle Gastrolounge at 29 Seven was inspired by the old Sky Castle radio booth.