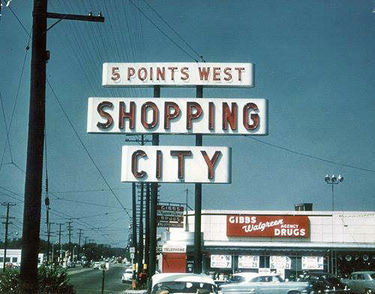 The Five Points West Shopping City is a large shopping center developed in 1941 by A. Page Sloss of Shepherd-Sloss Realty at Five Points West. At the time, the 24-acre project was announced as the largest private development in the region since 1925.

The Thomas Drive-In restaurant was the first new building, constructed on the extreme west corner of the site. The main retail strips were designed by James Gatling, who also designed Shepherd-Sloss' Plaza Stores on Highland Avenue. Construction of the first 400-foot x 800-foot building was begun by the Marbury-Moriss Construction Company on April 15, with the first stores opening on September 1. A 400-space parking lot was laid out to serve the development and a second building, 175 feet by 140 feet, was planned to break ground that summer.

The strip was given a face lift in 1961. A trolley service to carry shoppers around the center was instituted the same year. In 1964 a Britling West cafeteria opened on Avenue V near the shopping center's entrance. On January 1, 1966 the Montgomery-based Farm Bureau Insurance Companies purchased the shopping center from the Shepherd-Sloss Realty Co. for more than $4.5 million. Ferrell Woods managed the property for the company and helped to renew the activities of the Five Points West Chamber of Commerce to keep parking areas clean and secure. 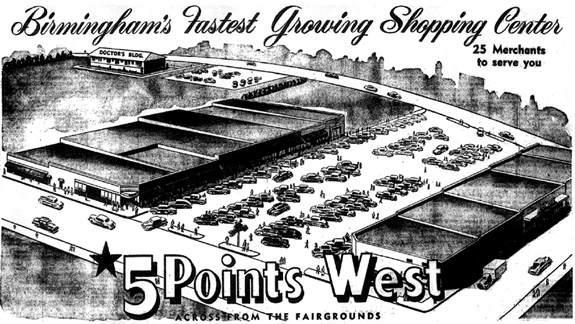 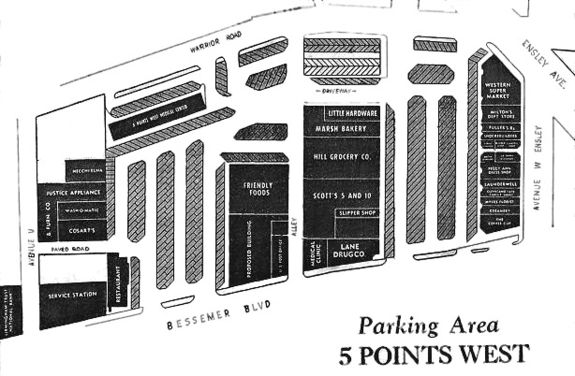